Learn more
Size750mL Proof128.4 (64.2% ABV) *Please note that the ABV of this bottle may vary
Batch 13 of Buffalo Trace's acclaimed Stagg Jr. releases is a "Junior" in name only. Aged 8 years and bottled at a hefty 128.4 proof, it retains the intensity and complexity of previous releases.
Notify me when this product is back in stock. 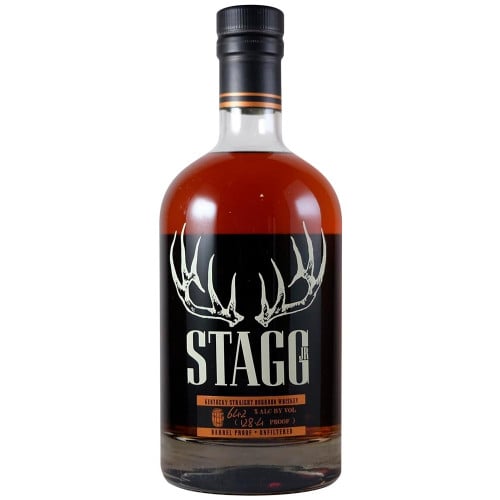 Buffalo Trace Distillery is the oldest continually operating distillery in the United States and includes the rich legacies of master distillers such as E.H. Taylor, Jr, George T. Stagg, Albert B. Blanton, Orville Schupp, and Elmer T. Lee. Today, the distillery is still family-owned, operating on the same 130 acres of land adjacent to the Kentucky River as it has for over 200 years. Buffalo Trace has produced a wide array of bourbons and whiskeys, featuring several collections from the Antique and O.F.C. Vintages, to Van Winkle and E.H. Taylor. Their Stagg Jr. releases are limited edition barrel proof bourbons, much like the George T. Stagg version included in the Buffalo Trace Antique Collection.

The distillery released their first Stagg Jr. in August of 2013 and they have produced about two batches every year. Each batch of Stagg is blended from bourbons aged approximately 8 or 9 years, and released at a high and unique barrel proof. The proof numbers are used to identify specific batches. These releases have received plenty of praise over the years and are beloved by many bourbon enthusiasts. Batch 13 of the Stagg Jr. was released in 2020 and it retains the intensity and complexity of the previous releases. It has spent 8 years in new charred American oak barrels. Uncut and unfiltered, it's bottled at 128.4 proof, making it a "Jr." in name only.

The nose opens with vanilla, molasses, dried fruit, oak, and charred wood. It's rich and complex on the palate as well with dark chocolate, cherry, cured meat, cinnamon, and black pepper. Finishes long and warm with lingering vanilla, chocolate, and raisin notes.