Learn more
Size750mL Proof94.6 Proof (47.3% ABV)
Awarded five stars in F. Paul Pacult's Spirit Journal, only 715 bottles of this single malt have ever been produced.
Notify me when this product is back in stock. 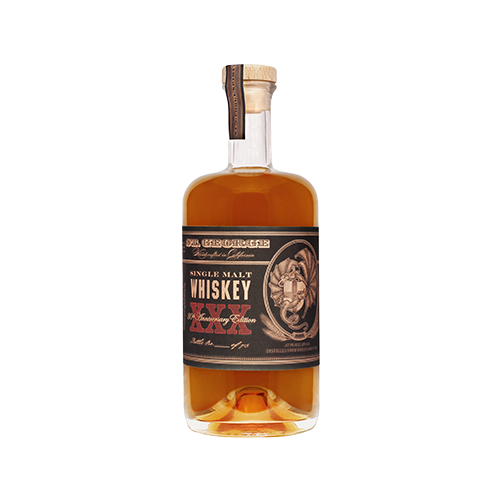 Founded in 1982 by German-born Jorg Rupf, St. George Spirits is one of the oldest craft distilleries in the United States. The distillery, which is housed in an old World War II airplane hangar on a former naval base just outside San Francisco, is home to Lance Winters, mad scientist and St. George's master distiller.

Winters is widely-known for experimenting with different types of spirits — his laboratory is equipped with a 10-liter test still, which sits next to dozens of glass beakers and graduated cylinders that cover every inch of his counterspace. Next to the dusty chalkboards caked with equations for the conversion of sugar to alcohol and intricate diagrams of molecular structures are bottles of experimental whiskies, vodkas and even an aging balsamic vinegar (it's 14 years old already).

St. George Single Malt Whiskey XXX 30th Anniversary Edition starts with two of the oldest barrels of whiskey at the distillery: SM-03 and BSG-73, which are aged for about fifteen and thirteen years, respectively. Winters, together with distiller Dave Smith, then blends the two older barrels with two younger barrels — Lot 12 and OCC-03 — that best showcase the characteristics of St. George whiskey. After getting the ideal blend, Winters, in a nod to St. George's early days as an eau de vie distillery, double barrels the whiskey in used pear eau de vie casks. While some whiskies are finished in former wine barrels, the unconventional pear eau de vie cask finishing lends an uncommon hint of sweetness to the single malt.

Only 715 bottles of this limited edition single malt have ever been produced. Try a bottle today!

Strong, sweet nose, with nutty malt, pear and other fruits prominent. The pears remain on the palate, complemented by notes of ginger, almond and vanilla. The finish is long and strikingly smooth, with the nutty malt flavors balancing the fruity sweetness.