Learn more
Size750mL Proof86 Proof (43% ABV) *Please note that the ABV of this bottle may vary
Made from roasted and smoked two-row barley and aged for up to 15 years, this single malt was named the Craft Whiskey of the Year by Whisky Advocate.
Notify me when this product is back in stock.

This product is available in: AZ Unfortunately, we can't ship to PO Boxes and APO addresses. 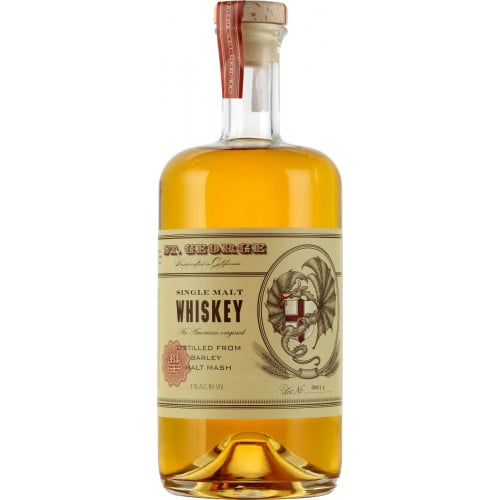 Winters, who is widely-known for experimenting with different types of spirits, has a laboratory dominated by a 10-liter test still in addition to the glass beakers and graduated cylinders that cover every inch of counterspace. Next to the dusty chalkboards caked with equations for the conversion of sugar to alcohol and intricate diagrams of molecular structures are bottles of experimental whiskies, vodkas and even an aging balsamic vinegar (it’s 14 years old already).

St. George Single Malt Whiskey is the realization of Winters’ dream to make an elegant and expressive American single malt whiskey. After sourcing two-row barley (traditionally used in English ales), Winters roasts a portion of the barley at different roast levels in order elicit rich aromas of hazelnut and cocoa. He smokes the remainder of they barely over beech and alder, adding complexity and character to the whiskey. After mashing and fermenting the grains, the wort is distilled through a traditional, 63-gallon copper-pot still — “it’s an artisanal process that results in a better-tasting product,” says Winters. After distillation, the whiskey is aged in a number of different types of wood, including refill bourbon, French oak, sherry and port casks.

Together with distiller Dave Smith, Winters drew from deep into the far corners of St. George’s whiskey library in order to craft the 14th lot of St. George Single Malt Whiskey. The whiskey is crafted from barrels ranging between four and fifteen years old, and is brought to proof and bottled by hand.

St. George Single Malt Whiskey Lot 14 has an aroma of milk chocolate, roasted nuts and cocoa that gives way to notes of honeydew, apricots, citrus and cinnamon on the palate. The finish is lush and ripe, with touches of plums, berries, hazelnuts and nutella.

St. George Single Malt was called “phenomenal” by the Sour Mash Manifesto, and possibly the “best U.S. Single Malt available today” by 1001 Whiskies to Try Before You Die.