Learn more
Size750mL Proof90 (45% ABV) *Please note that the ABV of this bottle may vary
"Something like a cross between traditional London dry and a rye whiskey… absolutely amazing in Negronis." — Washington Post 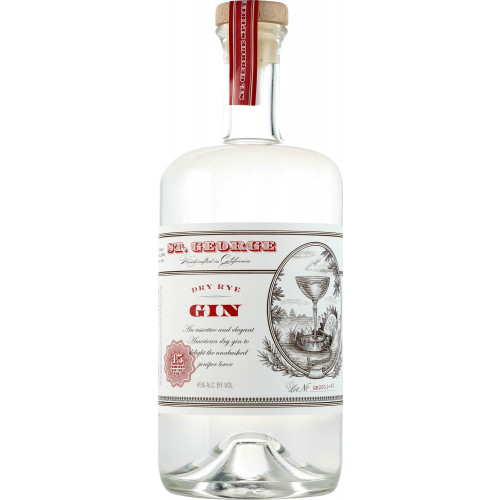 St. George makes their Dry Rye Gin in the same 1,500-liter copper pot still that they use to make their Terroir and Botanivore Gins. These Gins each have intricate botanicals bills designed to create a layered olfactory experience. St. George’s also makes a limited-release, barrel-aged version they call Dry Rye Reposado Gin. Rested in French and American oak wine casks, it has a lovely pink hue and a deep, rich flavor.

For their Dry Rye Gin they chose only six botanical ingredients: juniper berries steal the shown this expression, having 50% more than any of their gins. The botanicals are complemented by black peppercorn, caraway, coriander, grapefruit peel, lime peel—which were all designed to play up the juniper’s peppery nature.

A base of 100% pot-distilled rye makes for a very unconventional gin, but a unique option for whiskey lovers. This gin has structure, spice, and an impeccably rich mouthfeel. “Warm and spicy, it has a natural affinity with bitters, citrus, stone fruit, and ginger” (St. George’s).

Pick up a bottle of this fine gin today!

The nose is filled with spice, pepper and juniper, malt, citrus, coriander, caraway, and fruits. The palate is malty with rye, pepper, juniper, spices, rye and coriander. The finish is warm, spicy and creamy.