Size750mL Proof90 (45% ABV) each
St. George Terroir is "spectacularly evocative" according to Food and Wine Magazine, and "one of the most distinctive gins made in America" according to GQ Magazine.
Notify me when this product is back in stock. 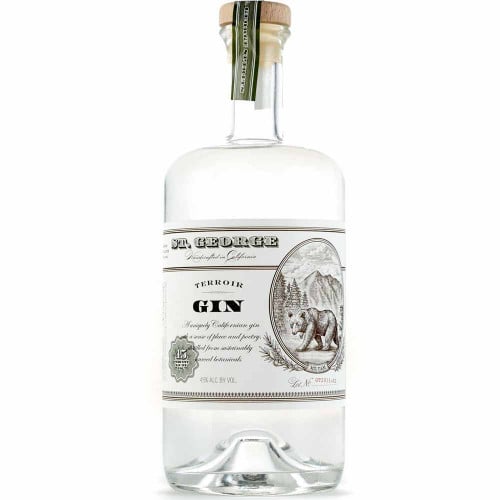 Made using juniper, Douglas Fir, California bay laurel, coastal sage and coriander seeds, along with a number of other herbs and botanicals, St. George Terroir Gin is a true California Gin. The coriander seeds are roasted inside a well-seasoned wok, which contributes an earthy, aromatic bouquet to the gin. In addition, the Douglas Fir and coastal sage are distilled individually through Winters' 250-liter copper-pot still, which minimizes seasonal configurables in the botanicals. Finally, while the fresh bay laurel leaves and juniper berries are infused through the still's botanical basket, the remainder of the botanicals are placed directly in the pot, resulting in a cleaner and crisper flavor.

St. George Terroir Gin has a stunning bouquet of fresh, forest aromas, including pine and oak. The woodsy notes are complemented by bursts of juniper and sage, and lead to a crisp finish. St. George Terroir is "spectacularly evocative"according to Food and Wine Magazine, and "one of the most distinctive gins made in America"according to GQ Magazine.

This gin represents a unique expression by one of America's most creative craft distilleries. Pick up a bottle today!

Terroir: Stunning bouquet of fresh, forest aromas, including pine and oak. Woodsy notes are complemented by bursts of juniper and sage, and lead to a crisp finish.