Size750mL Proof86 (43% ABV)
Breaking & Entering American Whiskey is the second release under St. George’s Breaking & Entering label, a blend of handpicked barrels from Kentucky and Tennessee.
Notify me when this product is back in stock. 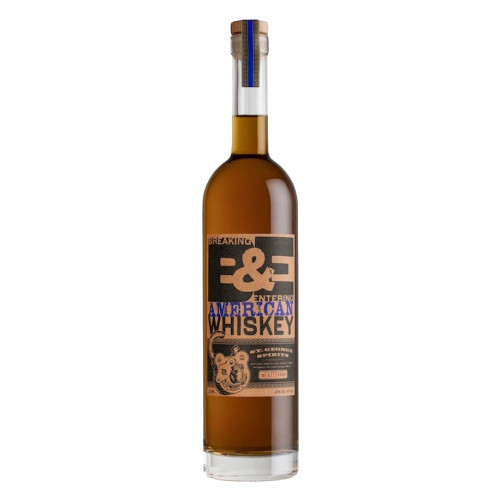 Founded in 1982 by German-born Jörg Rupf, St. George Spirits is one of the oldest craft distilleries in the United States.  The distillery, housed in an old World War II airplane hangar on a former naval base on the edge of San Francisco, is home to Lance Winters, nuclear engineer, mad scientist and St. George's master distiller, and Dave Smith, St. George's chief blender.

Winters and Smith, who are widely-known for experimenting with different types of spirits, have a laboratory dominated by a 10-liter test still, which sits adjacent to the glass beakers and graduated cylinders that cover every inch of their counter space. Next to the dusty chalkboards caked with equations for the conversion of sugar to alcohol and intricate diagrams of molecular structures are bottles of experimental whiskeys, vodkas and even an aging balsamic vinegar (it's 14 years old already).

After 30 years of producing their own spirits, St. George Spirits has developed a wicked hobby — barrel thieving. Breaking & Entering American Whiskey is the second release under St. George’s Breaking & Entering label, following their bourbon. B&E American Whiskey brings together bourbon and rye that head distiller/blender Dave Smith sourced and then blended with some of our own California malt whiskey. The blend brings together four grains—rye, corn, barley, wheat—with no one grain being dominant.

To make Breaking & Entering Whiskey, Smith sourced individual casks of rye and bourbon from distilleries in Kentucky and Tennessee and brought them back to St. George's distillery in California. He then blended the sourced barrels with some choice barrels from their in-house whiskey program to create a balanced, expressive, all-American whiskey.