Learn more
Size750mL Proof108.8 (54.4% ABV) *Please note that the ABV of this bottle may vary
Aged for nine years in used bourbon casks, this whisky is finished in claret (Bordeaux) casks for an additional three years.
Notify me when this product is back in stock. 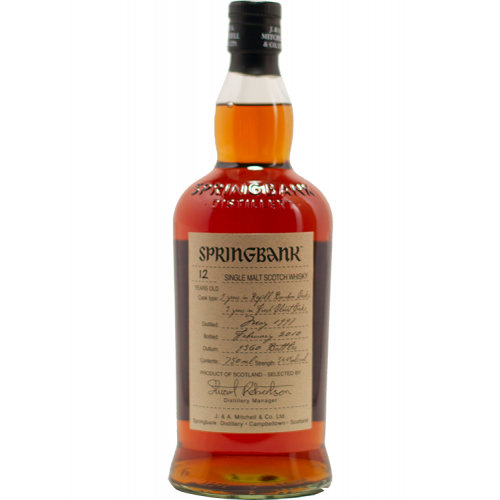 Following distillation, the whisky is aged in used bourbon casks. Since Campbeltown is located on a narrow peninsula, the strong, perennial sea winds, warmed by the gulf stream, add a slight hint of saltiness to the whisky as it ages. After aging in bourbon casks for nine years, this Springbank Whisky is double-barreled, or finished, in claret (Bordeaux) casks for an additional three years, giving it a beautiful, deep mahogany color (Springbank Distillery does not not use artificial coloring of any kind).

Springbank Whisky has a rich, luscious aroma with notes of dried fruits, caramel and butterscotch. The initial flavors of plums, grapes and berries are underpinned by hints of vanilla, caramel and a touch of salt and give way to a dry, slightly spicy finish.

Only 9,360 bottles of this Springbank 12 Year Old Single Malt Scotch have ever been produced, and most have already been consumed. Pick up one of these rare treasures today!

Nose is rich and fruity with hints of butterscotch, caramel, cereal and dried fruits — primarily raisins and prunes. Initially sweet with notes of plum and red berries, underpinned by vanilla caramel and orange peel. Finish is dry and slightly spicy, with a hint of smoke.