Caskers Rewards members earn up to 2 store points back when buying this bottle.
Size750mL Proof88 (44% ABV)
Aged for a minimum of six years and brought to proof with water sourced from a unique spring, this bourbon earned five stars from F. Paul Pacult's Spirit Journal.
Notify me when this product is back in stock. 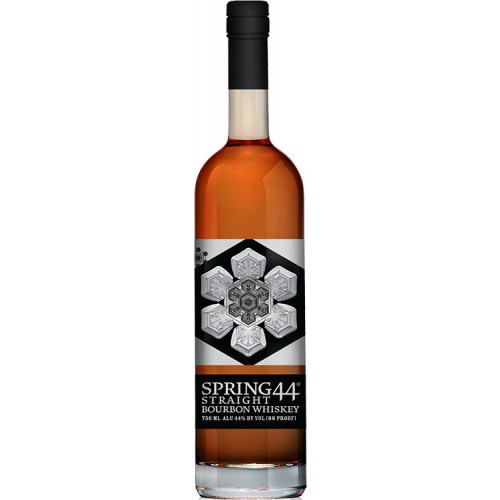 Just a few miles north of Denver, Jeff Lindauer, Russ Wall and Jeff McPhie are hoisting an , 450-gallon stainless steel water tank into the back of their Ford F-250 pickup truck. The truck, which the three men have nicknamed "Tinkerbell,"is used to transport water sourced from Spring44 back to their distillery in Loveland, Colorado. "The first time I knew we had something really special was when the lab called and asked where I got it," says Lindauer about water sourced from Spring44.

In 1969, Don Lindauer — Jeff's father — purchased a 40-acre parcel of property in Northern Colorado that remains accessible only by navigating a jeep trail. The property, situated 9,000 feet above sea level and completely surrounded by the Roosevelt National Forest, is home to Spring44, one of the purest sources of water on Earth. Spring44 water is never touched by chemicals or municipal water treatment plants — it comes directly from the ground. The spring isn't even served by an electrical grid — the power needed to source the water is generated entirely from the sun. Naturally filtered by earth, only one billionth of one percent (or 0.000000001%) of water in the world meets this strict definition. In addition, the water sourced from the spring is slightly acidic and has a low Total Dissolved Solids (TDS) ratio, meaning it has virtually no taste except for a touch of sweetness. "It's high-quality water," says Joe Tamurini, a senior engineer at Tetra Tech, a firm that specializes in engineering and consulting services related to water.

As a result, the bourbon has a deep red amber hue, along with an aroma of spices, honey, raisins and vanilla. The bourbon is full-bodied, with notes of orange, earthy minerals, smoke and cinnamon on the palate, and has a long, slightly drying finish. The bourbon earned five stars from F. Paul Pacult's Spirit Journal, which called it "beautiful, elegant and glorious."

Deep red amber hue, along with an aroma of spices, honey, raisins and vanilla. Full-bodied, with notes of orange, earthy minerals, smoke and cinnamon on the palate. Long, slightly drying finish.