Be the first to review this product
Smoke Wagon's high-rye Straight Bourbon was aged at the top floors of their warehouse, where the hot summer days work their magic on the barrels. Sweet and spicy, it has won a Double Gold Medal at the San Francisco World Spirits Competition in 2020.
$37.99
Add to Wish List

They have two brands under their belt now, both with several medals from the San Francisco World Spirits Competition: Silver Dollar American Vodka and Smoke Wagon. The latter comprises several bourbons, including the Smoke Wagon Straight Bourbon Whiskey which was released in 2019. Their entry-level expression showcases the signature Smoke Wagon profile with sweet notes and rye spice. The high-rye mash bill spirit was racked on the top 2 floors of their warehouse and never rotated, letting the hot summer days work their magic on the wood and the liquid within. Bottled without chill-filtration at 92.5 proof, it has won a Double Gold Medal at the 2020 edition of the San Francisco World Spirits Competition.

The nose has honey, toasted nuts, as well as oak, and a touch of heat. It's creamy on the palate with a honey & caramel sweetness, as well as oak, pepper spice, and nuttiness. Finishes sweet and creamy with lingering rye spice and oak. 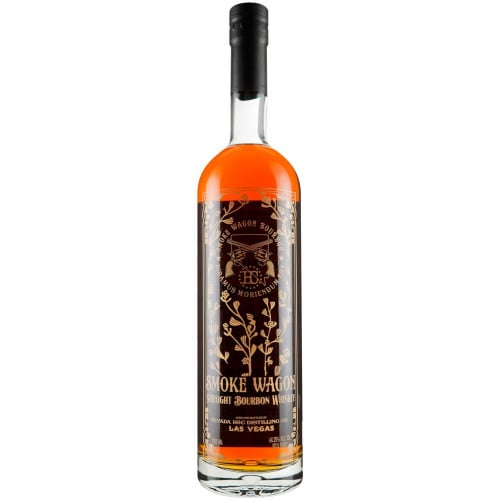