Learn more
Size750mL Proof90 (45% ABV) *Please note that the ABV of this bottle may vary
Coming from Iowa, heavy metal band Slipknot and the award-winning Cedar Ridge Distillery released a blend of straight bourbon and rye whiskeys. Blended by Shawn Craha a.k.a. “Clown” himself, this stunning blend has received raving reviews. 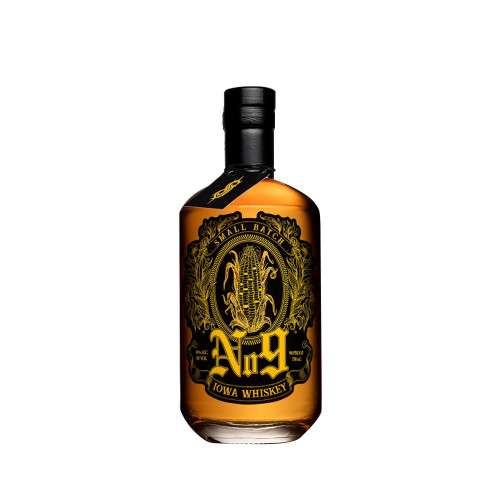 About Slipknot No.9 Iowa Whiskey

In 2019, a stunning whiskey collaboration consisting of two expressions was born between Slipknot, the famous American heavy metal band from Des Moines, Iowa, and the award-winning Cedar Ridge Distillery from Iowa.

Slipknot No.9 Iowa Whiskey is made from corn, grown at the Cellar Ridge Distillery farm in Winthrop, Iowa. A blend of straight bourbon and straight rye whiskeys, it’s crafted from 60% bourbon, which is aged for 3-4 years, and from 40% rye, which is also aged for 3-4 years. Blended by Percussionist Shawn Crahan, also known as “Clown”, who can be seen sporting a clown mask when performing, Slipknot No. 9 Reserve Iowa Whiskey was named for the number of band members. Bottled at 90 proof, this stunning whiskey begins with a floral nose while the palate brings cornbread, apple butter, and jalapeño.

Nestled in a picturesque stretch of the Heartlands, just outside the town of Swisher in Eastern Iowa, sits Cedar Ridge Vineyards, Winery, and Distillery. Family-owned by Jeff and Laurie Quint, Jeff serves as both Master Distiller and Master Winemaker at the small operation, which has an outsized reputation for quality. Cedar Ridge — the first micro-distillery in the state — began distilling vodka back in 2005 before moving onto fruit liqueurs and, eventually, bourbon, crafting Iowa’s first bourbon whiskey since Prohibition.

Get Slipknot No. 9 Iowa Whiskey today!

A floral nose with honeysuckle and lily. The palate brings cornbread, apple butter, and jalapeño. The finish brings a hint of chocolate.