Learn more
Size375mL Proof94 (47% ABV) *Please note that the ABV of this bottle may vary
Whipnose is the first whiskey in Seven Stills’ Collaboration Series, made from double IPA sourced from Pac Brew Lab. The beer was pot-distilled along with some maple sugar, and aged in new, five-gallon American Oak barrels for six months before bottling at 47% ABV.
Notify me when this product is back in stock. 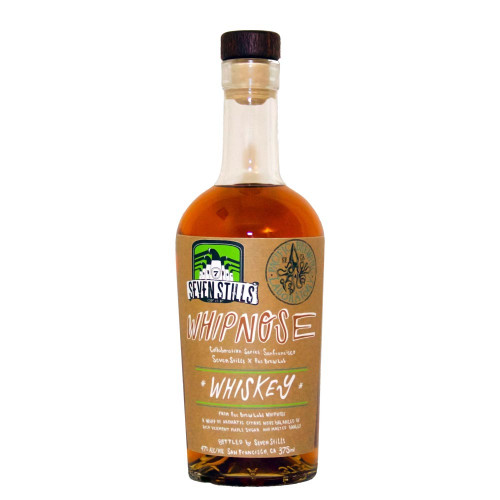 San Franciscan brewery and distillery Seven Stills makes whiskey a bit differently. Instead of fermenting the typical mash of corn, barley, rye or wheat, it brews ready to drink craft beer to use as the starting point for their whiskeys. Working both with their own creations as well as collaborating with other breweries, Seven Stills Brewery and Distillery turns delicious beer into truly unique expressions, which take on the essence of their parent beer. Seven Stills was founded by Tim Obert and Clint Potter, two college roommates who shared a passion for craft beer and pushing the boundaries. Tim was already brewing his own beer when one night over drinks Clint explained that whiskey wash was in fact just low-quality beer. After some exploration and experimentation in Clint’s parents’ backyard, the two started a company in 2013 in a storage unit in Dogpatch.

Seven years later, Seven Stills opened their flagship production facility. Staying true to their core value of community, Tim and Clint kept the production in San Francisco despite higher cost and risk. The new brewery and distillery in Mission Bay, which also features large indoor and outdoor dining areas and a bar, extends over 22,500 square feet. In addition to making whiskey and beer, Seven Stills also produces vodka, gin, barrel aged gin, pisco and other experimental spirits. Seven Stills works with local street artists, like Cannon Dill and Zio Ziegler, who design their bottles as unique as the spirits they hold.

Seven Stills Whipnose is the first whiskey in the distillery’s Collaboration Series. This whiskey was made from Pac Brew Lab's (now Black Hammer Brewing) double IPA, which was pot-distilled along with some maple sugar, then aged in new, five-gallon American Oak barrels for six months before bottling. The whiskey opens with huge whips of west coast hops and drinks like a concentrated IPA, but without any of the hop bitterness.

The nose is hoppy and citrusy, with undertones of vanilla. Fennel, rye spice and maple syrup appear on the rather savory palate, followed by cherry vanilla coke and pine forest notes on the finish.