Size750mL Proof80 (40% ABV)
Matured underwater at a depth of seven fathoms, this limited production rum is made from organic sugar cane.
Notify me when this product is back in stock. 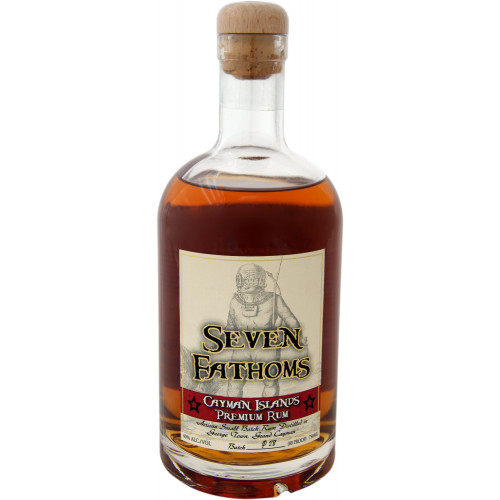 Made by man and matured by nature, Seven Fathoms Rum is the first and only spirit made entirely in the Cayman Islands. Handcrafted in small batches by master distillers Nelson Dilbert and Walker Romanica in their Georgetown, Grand Cayman distillery, Seven Fathoms Rum is aged underwater at a depth of forty-two feet, or seven fathoms.

While it's no secret that shipping wine and spirits on boats has traditionally produced higher quality drinks, Dilbert and Romanica realized that they could replicate these oceanic trips by simply allowing the tides and waves to push and pull on their barrels. The gentle motion of the waves and the alternating pressure of the water during the rising and ebbing tides helps push Seven Fathoms Rum deep into the pores of the oak barrels, extracting all of the rich oak and bourbon flavors from the wood, which, in turn, creates a complex rum with extraordinary depth of character and flavor.

Sweet on the nose, with aromas of butterscotch, toasted almonds, and raisin bread, Seven Fathoms Rum is medium bodied and silky smooth. Notes of vanilla and mocha as the rum first passes the palate turn to hints of black liquorice and pepper, making for a seductive finish.

With notes of vanilla and mocha, this rum has sweet, soft aromas.