NOTE:
Vintage may vary.
This legendary Sazerac has earned several accolades including 5 Stars from F. Paul Pacult's Spirit Journal, “Best Rye” in Jim Murray's 2018 & 2019 Whisky Bible, and a near perfect 95 Points from the Whisky Advocate.
Notify me when this product is back in stock. 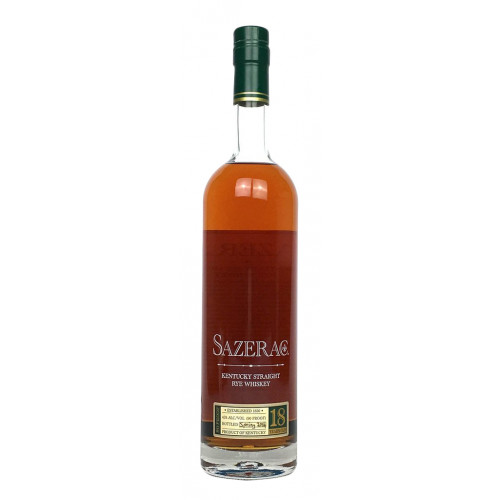 In 1838, a Creole immigrant named Antoine Peychaud opened the doors to a pharmacy on Royal Street in the French Quarter of New Orleans. While Peychaud was an apothecary by trade, he was also a natural mixologist. He would often invite friends over to his pharmacy after it had closed and mixed drinks for them, including a drink he crafted from brandy, absinthe and a proprietary blend of bitters.

Peychaud's cocktail became wildly popular throughout New Orleans. In 1850, Sewell Taylor — owner of the Sazerac Coffee House located on Exchange Alley — institutionalized the cocktail by using only Sazerac de Forge et Fils Brandy, a brandy which Taylor imported and sold exclusively. By 1869, Thomas H. Handy had purchased the Sazerac Coffee House from Taylor and by the turn of the century, a phylloxera epidemic forced coffee houses (at the time, the term "coffee house" was used to refer to a cocktail bar) to use rye whiskey rather than brandy in the making of the Sazerac.

Sazerac Straight Rye Whiskey is rumored to be made from a mash of 51% rye, 39% corn and 10% malted barley. Following distillation, the whiskey is aged for a minimum of six years in the Kentucky heat, before a small batch of barrels are married together.

Part of the Buffalo Trace Antique Collection, this stunning Sazerac spent 18 years in oak before being bottled at an inviting 90 proof. “You can expect a beautiful mellow spice and dry sweetness that dances on the tongue, giving pure delight that is worthy of the Sazerac name” (producer).

Very mature, with notes of oak, leather molasses and all-spice. The long, warm finish is preceded by notes of mint, eucalyptus, cinnamon, vanilla, and lingering pepper.