Learn more
Size750mL Proof86 (43% ABV) *Please note that the ABV of this bottle may vary
Matured in American oak barrels, this whiskey is made in homage to Sam Houston.
Notify me when this product is back in stock. 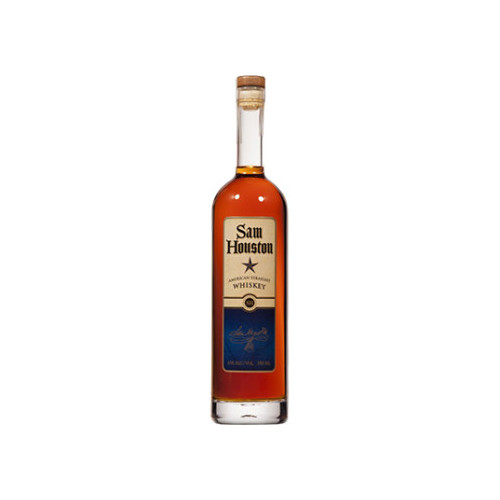 Sam Houston, the namesake of Houston, Texas, was truly one of a kind. After running away from home as a boy to join a Cherokee tribe in Tennessee, Houston eventually returned to his family before heading off again to fight the British in the War of 1812. Following the war, Houston — by then widely recognized as Andrew Jackson's protégé — climbed the political ranks and was elected Governor of Tennessee.

After a few controversies in office, Houston moved to the Mexican-controlled territory of Texas, where he was immediately swept up into politics once again. Using his past military experience, he became a fierce leader in the state's fight for independence. His victory at the Battle of San Jacinto established Texas' independence from Mexico, and Houston further secured the new state's annexation to the United States of America. Houston was elected Governor of Texas in 1827, making him the only American to serve as Governor for two different states.

Sam Houston American Straight Whiskey is also one-of-a-kind, crafted in homage to Houston himself. The whiskey is made from a blend of Kentucky bourbon, which is then laid to rest in charred, white oak barrels, leading to its golden amber color. The whiskey has an aroma of caramel and vanilla, with additional, slightly smoky undertones. These flavors shine through on the palate as well, and lead to a finish that's characterized by robust oak and just a hint of cherry.

Sam Houston American Straight Whiskey is a distinguished spirit that's full of character, much like Houston himself. Pick up a one of a kind American whiskey today!

Aroma of caramel and vanilla, with additional, slightly smoky undertones. These flavors shine through on the palate as well. Finish characterized by robust oak and just a hint of cherry.