Size750mL Proof103 (51.5% ABV)
This is a rare and rich bourbon, dedicated to Sam Houston, a Democratic senator of historic significance for the State of Texas. It was hand-picked from a private reserve of premium Bourbon.
Notify me when this product is back in stock. 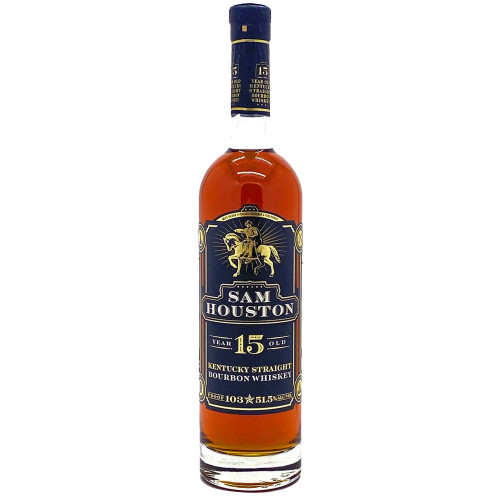 Sam Houston 15 Year Old Kentucky Straight Bourbon Whiskey is dedicated to Sam Houston, an important fighter for Texas’ independence and the namesake of Houston, Texas. Produced in Bardstown, Kentucky, Release No. 6 is the most aged edition in the collection. It’s crafted from specific barrels in a private reserve of premium bourbon that were sampled and hand-picked by industry insiders and bourbon enthusiasts. Bottled at 51.5% ABV, this rich bourbon greets with a mild nose and releases flavors of spice, stoned fruit, woody notes, spearmint, leather, and subtle caramel sweetness.

Sam Houston, the namesake of Houston, Texas, was truly one of a kind. After running away from home as a boy to join a Cherokee tribe in Tennessee, Houston eventually returned to his family before heading off again to fight the British in the War of 1812. Following the war, Houston — by then widely recognized as Andrew Jackson's protégé — climbed the political ranks and was elected Governor of Tennessee. After a few controversies in office, Houston moved to the Mexican-controlled territory of Texas, where he was immediately swept up into politics once again. Using his past military experience, he became a fierce leader in the state's fight for independence. His victory at the Battle of San Jacinto established Texas' independence from Mexico, and Houston further secured the new state's annexation to the United States of America. Houston was elected Governor of Texas in 1827, making him the only American to serve as Governor for two different states.

This rich bourbon greets with a mild nose and releases flavors of spice, stoned fruit, woody notes, spearmint, leather, and subtle caramel sweetness. The finish is clean and soft.