Learn more
Size1420mL Proof18 (9% ABV) *Please note that the ABV of this bottle may vary
Developed in partnership with Baltimore-based mixer masters CAnE Collective, this 4-pack of canned cocktails is crafted with Sagamore Spirit Rye Whiskey, red grapefruit juice, lime juice, agave, and natural honey flavor.
Notify me when this product is back in stock. 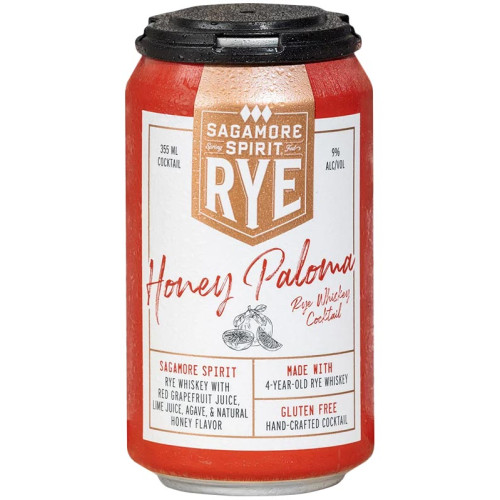 Recently, Sagamore Spirits has added a new way to enjoy their 4-year-old rye whiskey in the form of 3 canned cocktails: the Honey Paloma, Lemon Tea Fizz, and Black-Eyed Rye. The convenient ready-to-drink cocktails come in 355ml cans and are gluten-free. These were developed in partnership with the Baltimore-based mixer company CAnE Collective. The Honey Paloma is an 18-proof drink that is crafted with Sagamore Spirit Rye Whiskey, red grapefruit juice, lime juice, agave, and natural honey flavor. Juicy, fruity, and complex, it's a refreshing carbonated drink.

The nose has juicy and zesty citrus notes with the rye backbone shining through. The palate has a balance of sweetness and acidity with honey, grapefruit, and lime notes.