Size1420mL Proof10 (5% ABV)
Absolut Vodka is known for helping pave the way for flavored vodka. This ready-to-drink canned cocktail is made with Absolut vodka, all-natural flavors, and real fruit juice, making for a refreshingly crisp, delicious, and convenient drink that comes in 4-packs of 355mL cans.
Notify me when this product is back in stock. 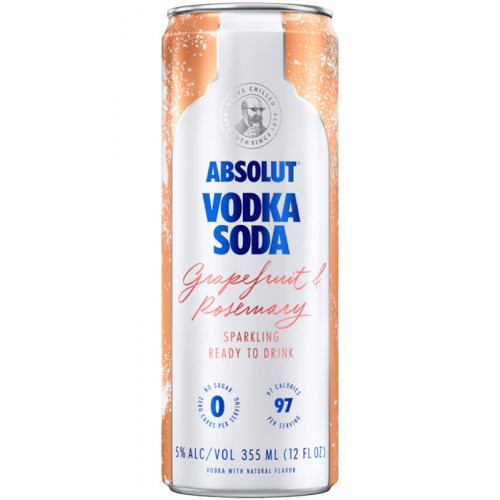 Absolut Vodka is produced in Åhus, Sweden, from winter wheat and other locally-sourced ingredients. Absolut pioneered the flavored vodka market with their Absolut Pepar and Absolut Citron expression in the 1980s. With nearly 20 flavors in their lineup, they recently added canned cocktails into the mix. Absolut Grapefruit & Rosemary Sparkling Cocktail is made with Absolut Vodka, all-natural flavors, and real fruit juice, making for a crisp and refreshing cocktail that's as convenient as it is delicious. Clocking in at 10 proof, this ready-to-drink cocktail comes in 355mL cans.

Get your 4-pack of this delicious Absolut cocktail today!

Famous for its purity, smoothness, and gentle sweetness, Absolut Vodka makes a great cocktail base. There's a balance of bitterness and acidity with citrusy and refreshing grapefruit along with a touch of spice and rosemary. The finish is long and crisp.