Size1420mL Proof10 (5% ABV)
In the mid-1980s, Absolut helped pave the way for flavored vodka. This vodka-based canned cocktail is the continuation of that tradition. Crafted with Absolut Vodka, all-natural flavors, and real fruit juice, it's a deliciously crisp, refreshing, and convenient ready-to-drink cocktail that comes in packs of four 355mL cans.
Notify me when this product is back in stock. 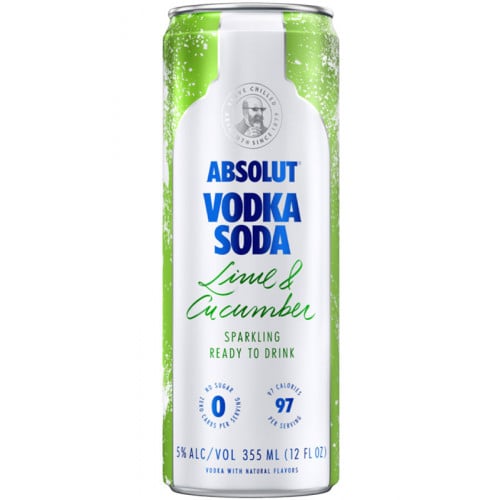 Every cocktail starts with a solid base. The folks at Absolut Vodka have the perfect ingredient: their smooth, pure, and gently sweet vodka and decades of experience with flavored vodkas. Having paved the way for the category in the mid-1980s with the Absolut Pepar and Absolut Citron, they have more recently released a lineup of canned cocktails. Absolut Lime & Cucumber Sparkling Cocktail comes in 4-packs of 355mL cans and clocks in at 10 proof. Low in calories, the ready-to-drink cocktail is made with Absolut Vodka, all-natural flavors, and real fruit juice, making for a deliciously refreshing, crisp, and convenient drink that's perfect for the summer.

Get your 4-pack of this refreshingly crisp RTD cocktail today!

The pure, smooth, and pleasantly sweet Absolut Vodka serves as the base for this canned cocktail. Crisp and refreshing, you'll find prominent lime and bright cucumber notes with a fresh and clean finish.