Size1420mL Proof7.2 (3.6% ABV)
This light and bright vodka spritz is made with Ketel One's Botanical Vodka of the same name and sparkling water. At just 73 calories and 3.6% ABV it's a crisp and refreshingly fruity fizzy drink.
Notify me when this product is back in stock. 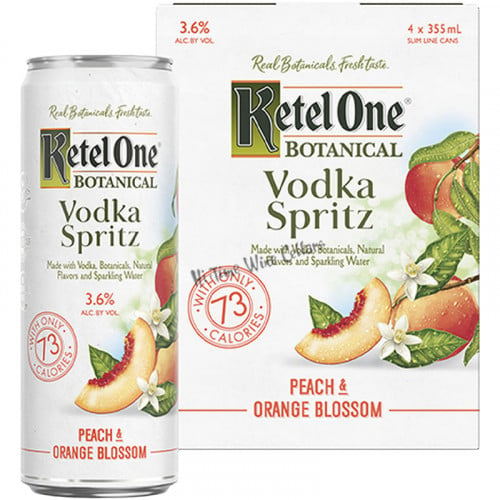 In 2020 Ketel One took its first step into the world of canned cocktails with their Ketel One Botanical Vodka Spritz. With its low 3.6% ABV and a scant 73 calories per drink, it's a light drink that's perfect for summer, and more: "The Ketel One Botanical Vodka Spritz isn’t meant to solely be a summer cocktail, rather it is meant to effortlessly elevate any occasion, anytime, anywhere," said the two Nolets in charge of distilling. Their Botanical Vodka comes to the US, where it is combined with sparkling water, resulting in a refreshingly fizzy drink that has zero carbs and added sugar, and no artificial flavors or sweeteners. Ketel One Botanical Peach & Orange Blossom is made with their Botanical Vodka of the same name and sparkling water. Natural peach aroma and flavor meet floral orange blossom undertones for a refreshingly fruity fizzy drink.

Grab a 4-pack of this peachy vodka spritz today!

The peach notes take the center stage with this light ready-to-drink vodka spritz. Underneath you'll find gentler floral notes of orange blossoms with a refreshing, juicy, and fizzy finish.