Size1420mL Proof14 (7% ABV)
Crafted with Crown Royal Whisky, lemonade, and all-natural flavors, this limited-edition drink is the latest addition to Crown Royal's lineup of canned cocktails. Perfect for summer, it's available here in a 4-pack of 12 fl oz (355mL) cans.
Notify me when this product is back in stock. 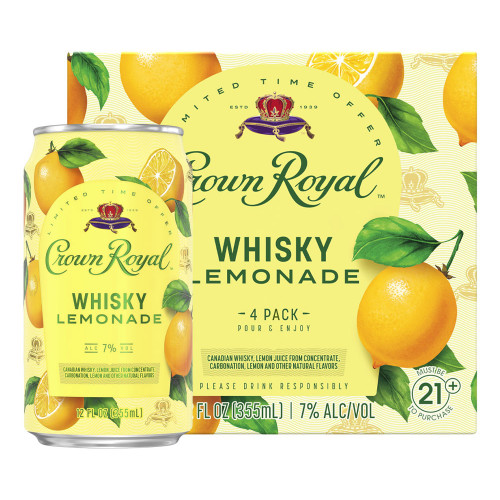 Whisky Lemonade is a recent, limited-edition addition to their lineup of canned cocktails that includes Peach Tea, Washington Apple, and Whisky & Cola. Built on a solid foundation of Crown Royal Whisky, this convenient, ready-to-drink cocktail brings together the smooth whisky with lemonade and all-natural flavors, resulting in a light and refreshing 14-proof drink that's perfect for hot days. It's available here in a 4-pack of 12 fl oz (355mL) cans.

This light, juicy, and fruity cocktail opens with fresh lemon, oak, vanilla, fruit, and maple syrup aromas. The palate features an equally bright balance of sweetness, tartness, and a solid wheated whisky backbone. The finish is refreshingly citrusy and effervescent with toasted oak and whisky notes.