Size750mL Proof102.2 (51.1% ABV)
Laid to rest in 1998 by Jimmy and Eddie Russell for a “special occasion,” this bourbon is the oldest and most limited offering ever from Wild Turkey Distillery.
Notify me when this product is back in stock. 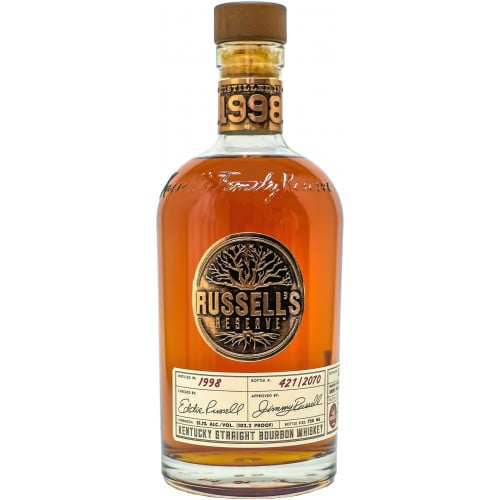 Back in 1998, Jimmy Russell and his son Eddie — now joint master distiller of Wild Turkey — decided to lay a select few barrels (23 to be exact) down to rest, intending to save them for a special occasion. At that point, Jimmy had spent 45 years at the distillery, and it was presumed he would retire later that year. Fate had other plans in store, however, and today Jimmy Russell remains Wild Turkey’s joint master distiller with 61 years of experience under his belt.

In 2014, Eddie was checking on these special barrels when he noticed they were evaporating much quicker than anticipated. He shared some samples with his father, and the duo decided not to wait: they’d found something spectacular and wanted to share it with the world immediately.

“Typically, a bourbon this old picks up a lot of flavor from the barrel and can taste quite woody and dry. We like to retain the caramel, vanilla and fruity notes in our whiskies and this particular liquid seemed to reach a sweet spot around the 15 year mark,” says Eddie. “It was important for us to stop the aging before those less desirable flavors took over the overall profile of the bourbon. I guess I am going to have to find another bourbon to celebrate Jimmy’s retirement… if that ever happens.”

Caskers has secured an extremely limited number of bottles for our members, so make sure you pick up a bottle today!

Aroma of cracked corn, pralines and spice, and leads to a luscious palate filled with notes of dark cherry, caramel, oak and chocolate. The finish, which lingers endlessly, has pronounced notes of char, ginger and apple crumble.