Be the first to review this product
Russell’s Reserve 13 Year Old Kentucky Straight Bourbon is limited-edition whiskey produced by the Wild Turkey Distilling. The latest expression in the Russell’s Reserve line is bottled without chill filtration and at barrel proof, at 57.4% ABV.
$649.99
Add to Wish List

In 1869, the Ripy brothers opened the Old Hickory Distillery in Tyrone near Lawrenceburg, Kentucky. The distillery sold the bourbon it produced to wholesalers who bottled it under their own brands. One of those wholesalers, Austin Nichols, created the Wild Turkey brand in 1942. Austin Nichols continued to purchase its whiskey from the distillery after it was bought by Robert and Alvin Gould in 1949, until, in 1971, it purchased the facility and changed its name to the Wild Turkey Distillery. In 1980, the distillery and the brand were purchased by Pernod Ricard, which sold it to the Campari Group in 2009.

In 1954, Jimmy Russell joined Wild Turkey as its third master distiller, learning the craft from his predecessor Bill Hughes and the distillery founder’s great grandson Ernest W. Ripy. In 1981, his son Eddie Russell joined the team as a relief operator and began to work his way up the ladder. Today, Jimmy is the world’s longest-tenured active master distiller, whose ultimate craftsmanship earned him the nicknames Buddha of Bourbon and The Master Distiller’s Master Distiller. Eddie was promoted to master distiller after 35 years with Wild Turkey, in 2015. Jimmy and Eddie are the only active father and son duo of bourbon master distillers in the world, and both are member of the Bourbon Hall of Fame. With a century of combined distilling experience, the two co-created Russell’s Reserve, a line of award-winning bourbons and ryes that exemplify their mastery of the craft.

Russell’s Reserve 13 Year Old Kentucky Straight Bourbon is the latest expression in the Russell’s Reserve line. This limited-edition whiskey is bottled without chill filtration and at barrel proof, at 57.4% ABV. This bold yet smooth bourbon pays tribute to the distillery’s heritage and the legacy pioneered by Jimmy, while showcasing Eddie’s innovative talents and expert ability to develop supreme flavors through careful aging and a keen sense for identifying only the highest quality barrels.

The nose with aromas of red fruit and charred confectionary is followed by a sweet palate with notes of dried dark fruit, chocolate, and toasted brown sugar, honey and nougat. The finish is strong and lasting. 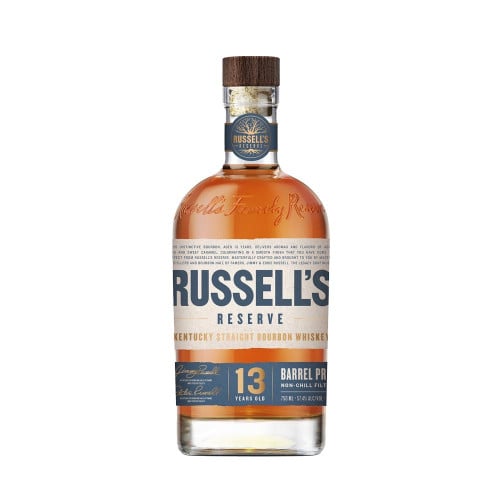