Learn more
Size750mL Proof90 (45% ABV) *Please note that the ABV of this bottle may vary
Aged for a minimum of two years, this bourbon is crafted in the heart of Montana.
Notify me when this product is back in stock. 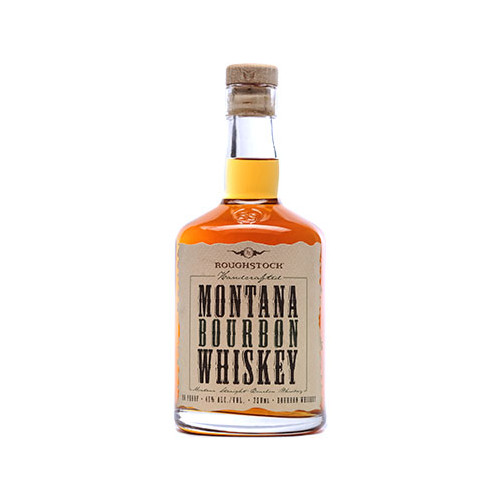 Nestled at the foothills of the Bridger Mountain Range in southwestern Montana, RoughStock Distillery is the first distillery in Montana since Prohibition, and the first distillery to make whiskey in Montana in over a century. The distillery is the brainchild of Bryan Schultz, RoughStock's owner and master distiller. After serving overseas in the armed forces, Schultz moved back to his native Montana in order to open the distillery. "We mortgaged everything we had," says Schultz, "we sold all of our stuff and we maxed out our credit cards, because we knew that the words "˜Montana' and "˜Whiskey' fit really well together."

RoughStock Montana Straight Bourbon Whiskey is crafted by marrying together four unique bourbons, each of which are made with varying recipes of corn, wheat, rye and malted barley. After each bourbon has been distilled twice through a copper-pot still, the bourbons are matured in heavily charred, virgin American white oak casks. The casks are laid to rest in a temperature controlled warehouse in the foothills of the Bridger Mountains. "The frequent high pressure and low pressure weather systems near the mountains work the whiskey in and out of the barrel staves tirelessly," says Schultz.

Then, after maturing to the "peak of perfection,"the bourbons are married together, creating a whole that is greater than the sum of its parts. "When these individual mature whiskeys are married together," says Schultz, "our Montana Bourbon becomes a rich and complex whiskey with multiple layers of exceptional flavor."

RoughStock Montana Straight Bourbon Whiskey has an aroma of dark nuts, roasted corn and vanilla that gives way to notes of dark chocolate, caramel, plums and oak spices on the palate. The finish is bold and unique — fitting for a Montana bourbon — with a touch of ginger and cloves.

Aroma of dark nuts, roasted corn and vanilla. Notes of dark chocolate, caramel, plums and oak spices on the palate. Finish is bold and unique — fitting for a Montana bourbon — with a touch of ginger and cloves.