Learn more
Size750mL Proof90 (45% ABV) each *Please note that the ABV of this bottle may vary
This bourbon is finished in casks that were previously used to mature merlot and chardonnay, while this rye is aged in virgin American oak, used bourbon and single malt casks. 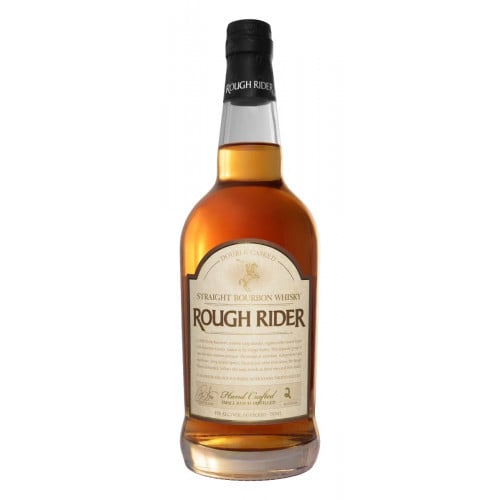 In 1898, Teddy Roosevelt — a Long Island native — organized the First United States Volunteer Cavalry, commonly known as the "Rough Riders,"in preparation for the Spanish-American War. The regiment comprised 1,250 volunteers from across the country, including cowboys, Native Americans and other pioneers of the West.

After seeing action in Cuba, the Rough Riders earned a decisive victory at the Battle of San Juan Hill before returning to Long Island. Upon their return, the soldiers celebrated their victory and presented Colonel Roosevelt with a small bronze statue of a cowboy riding a bucking horse. "There could have been no more appropriate gift from such a regiment,"wrote Roosevelt later. "Most of them looked upon the bronze with the critical eyes of professionals. I doubt if there was any regiment in the world which contained so large a number of men able to ride the wildest and most dangerous horses."

Crafted by Long Island Spirits, Rough Rider Straight Bourbon Whiskey pays homage to the First United States Volunteer Cavalry. Made from a mash of 60% corn, 35% rye and 5% malted barley, the bourbon is aged for a minimum of four years in newly charred American oak casks. "After aging, the bourbon is double-barreled, or finished, in wine casks," says Rich Stabile, Long Island Spirits founder. "The wine casks include merlot casks and chardonnay casks, and are chosen from among the finest wineries on Long Island."Before the aged bourbon is poured into the wine casks, though, each wine barrel is washed with a local, Long Island brandy. "The cask finishing wash tempers each wine barrel, resulting in a more mellow, complex bourbon,"adds Stabile. After the bourbon is finished for a few months in the wine casks (the exact time depends on the flavor profile of the batch), each bottle is brought to proof and filled by hand.

Rough Rider Bull Moose Three Barrel Rye Whiskey pays tribute to the Progressive Party, which was formed by Roosevelt in 1912. The party became known as the "Bull Moose Party"after Roosevelt, who had just been wounded in an assassination attempt, boasted that "it takes more than that to kill a bull moose." The rye is made from a mash of 95% rye and 5% malted barley, and is matured in three types of casks, each of which contributes unique flavors and aromas to the whiskey. The rye's journey begins in new, American oak casks that add hints of spicy cinnamon and oak to the rye. After its initial maturation, the rye is aged in bourbon casks before finally being finished in casks that were previously used to age Pine Barrens Single Malt Whiskey. This triple-maturation process gives the rye depth and complexity, and balances out the rye's naturally spicy notes with touches of caramel, apricots, buttery bread and brown sugar. Following maturation, the rye is brought to proof and bottled by hand.

Each bottle of Rough Rider Bourbon and Rough Rider Rye Whiskey is adorned with an image of the bronze statue given to Roosevelt, and includes a handwritten scrawl of the current batch number.

"It's part of the pioneer spirit to try to do something by putting your own signature on it," says Stabile. Become a Rough Rider and pick up a bottle of bourbon and rye today!

Bourbon: Deep amber color and floral, fruity nose. Notes of dried fruits, caramel and vanilla are well-balanced against hints of cinnamon, oak and spices and lead to a long, savory finish.