Size750mL Proof112.6 (56.3% ABV)
This expression has Rossville Union selecting barrels aged 5 and 6 years in new charred American oak barrels to create a full-bodied and bold rye whiskey that is bottled at a full 112.6 proof.
Notify me when this product is back in stock. 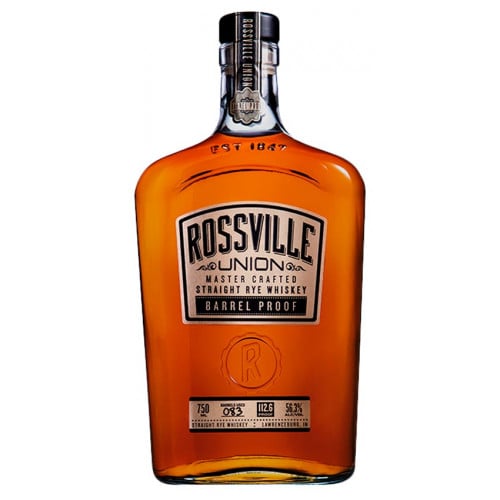 But by the 20th century, the company had come a long way, capable of storing 60 thousand barrels at once. Rye whiskey was on the rise and the distillery was up to the challenge. The spirit was immensely popular before Prohibition and the old-fashioned was created among other rye cocktails.

Rossville Union was resurrected by Ross & Squibb Distillery and continues the tradition at the historic 1847 distillery, focusing on masterfully-crafted rye whiskey. Their Master Crafted Straight Rye Whiskey Barrel Proof expression is a testament to that. They carefully select barrels, aged 5 and 6 years in new American charred oak barrels, creating a full-bodied and bold whiskey with plenty of spice, caramel, and a balanced smokiness that's bottled at 112.6 proof.

The rye spice becomes immediately apparent on the nose with red pepper and ginger notes. The rich palate has vanilla, caramel, candied fruit, as well as plenty of spice, oak, and a hint of smoke and chocolate. Finishes long and warming with lingering spice.