Learn more
Size750mL Proof110 (55% ABV) *Please note that the ABV of this bottle may vary
Old Pepper's Single Barrel series consists of their very best barrels of rye whiskey. The second round of maturation takes place in heavily toasted Kentucky oak barrels, which results in a rich and complex spirit that is bottled at 110 proof.
Notify me when this product is back in stock. 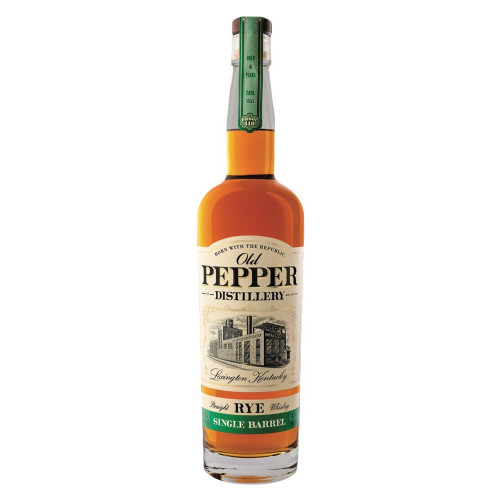 Today the re-launched brand is back in full force. "We did extensive research and spent years collecting and analyzing full, preserved bottles of original Pepper Whiskey," says Amir Peay. They even acquired a letter written by Pepper himself, detailing the exact mash bill and recipe used to create Old 1776. "We wanted to pay homage to Pepper's legacy and do our best to recreate the original Pepper Whiskey — something that was part of American history," he says.

The limited-quantity Single Barrel Rye Whiskey contains some of their best barrels. Crafted from a mash bill of 95% rye and 5% malted barley, this straight rye is double oaked, meaning it goes for a second round of maturation in heavily toasted Kentucky oak barrels that have been air-dried for 2 years. It's a rich and complex 4-year-old rye that is bottled at 110 proof.

It's complex and full-bodied with notes of mint, cloves, eucalyptus, dark chocolate, and honey. Finishes extra smooth and long.