Size750mL Proof90 (45% ABV)
This Rod & Hammer Bourbon is distilled using purified Pacific Ocean water.
Notify me when this product is back in stock. 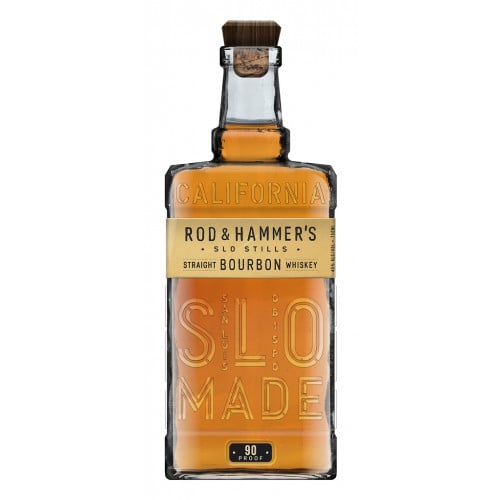 Founded ten years ago by California surfer Rodney “Rod” Cegelski, and Aussie Hamish “Hammer” Marshall, Rod & Hammer Bourbon is an American classic. It's aged two years in new American oak barrels to a deep amber color. The result is a smooth and mellow whiskey with hints of caramel, roasted nuts, corn, and vanilla when tasted neat.

Founded to handcraft spirits with purified Pacific Ocean water, the story of Slo Stills began in 1988 at the Slo Brew brewery. In 2012 they distilled and aged their first whiskey, a rye beer mash made in the original Garden street copper kettle.

Dried & malted grains such as corn or rye, are milled to expose the starch contained within. Water is added to create a mash and is cooked to convert starches into sugars, forming a liquid called “wort.” Yeast is added to the wort in fermenting tanks to convert the sugars to alcohol, resulting in a beer.

This beer is transferred to a still and heated, causing the alcohol to vaporize and separate from the water & solids. The resultant spirit is then transferred to charred new American Oak barrels to mature from 6 months to 2 years or more. This Rod & Hammer Bourbon is sweet and smokey on the nose with notes of caramel and vanilla on the palate. The finish is smooth with sweet corn.

Sweet and smokey notes on the nose, followed by notes of caramel and vanilla on the palate. The finish is smooth with sweet corn.