Size750mL Proof100 (50% ABV)
The Rock Town 4YR Bottled In Bond Straight Bourbon Whiskey is a premium small batch bourbon distilled from a mash of 82% corn, 9% wheat, and 9% malted barley. This expression, which is aged for 4 years, and bottled at 100 proof, comes "Highly Recommended" by the Ultimate Spirits Challenge. 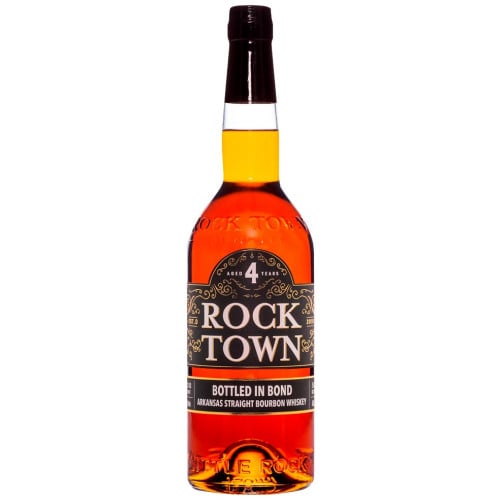 When Rock Town Distillery was founded in 2010 by Phil Brandon, it became the first legal distillery of any kind in Arkansas since Prohibition. Rock Town, located in downtown Little Rock, is a true grain-to-glass distillery, making its craft spirits from corn, wheat and rye that are grown within a 125-mile radius of the distillery. The first spirits distilled at Rock Town were vodka, gin, and unaged Arkansas Lightning whiskey, touted as legal moonshine. They later added liqueurs and bottled cocktails to their range, and of course whiskey. Their line of Arkansas-made whiskeys comprises bourbons and ryes, as well as a hickory smoked whiskey, and they also created a number of anniversary editions. Passion for making premium spirits and dedication to the craft have earned this artisan craft distillery a number of international awards for its handcrafted products, including Double Gold at the San Francisco World Spirits Competition and Gold from the World Whiskey Masters for their bourbon.

To get the bottled-in-bond label, a whiskey must be produced according to strict federal regulations, originally laid out in the Bottled-In-Bond act of 1897 that was adopted with the aim of eliminating the widespread adulteration of whiskey. These standards prescribe that a whiskey must be produced in one distillation season, by one distiller at one distillery, aged for least 4 years in a federally bonded warehouse, and bottled at 100 proof.

The Rock Town 4YR Bottled In Bond Straight Bourbon Whiskey is a premium small batch bourbon whiskey distilled from a mash of 82% Arkansas grown corn, 9% Arkansas wheat, and 9% malted barley. Like all of their whiskeys, it is made from grain to glass at the distillery in Little Rock. After aging for 4 years in 53 gallon barrels, it is bottled at 100 proof.

Balanced notes of caramel and toffee with undertones of vanilla, cocoa, and mint on the nose are followed by a rich and warm palate with classic wheated bourbon flavors, including warm caramel sauce, chocolate, and apricot. The long and sweet finish has notes of malt and spice.