Size750mL Proof92 (46% ABV)
Only 1,590 bottles of this rum, which was aged for eight years in ex-bourbon casks and finished in Martinez port casks, have ever been produced.
Notify me when this product is back in stock. 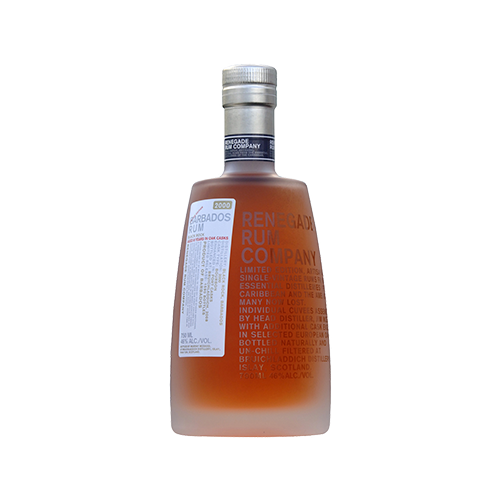 Situated in the southern parish of St. Michael on the island of Barbados, the West Indies Rum Distillery was founded in 1893 by the Stades Brothers. The brothers, who emigrated to Barbados from Germany, opened the distillery with the intent to export the rum they produced in Barbados back to their homeland. After a decade of operating the distillery, however, a group of Barbadian investors acquired it from the Stades, and to this day, the distillery remains locally owned.

Renegade Barbados Rum is made from raw sugar cane that is distilled at the West Indies Rum Distillery — first through a column still and then twice through a pot still. In Barbados, distilleries are required to apply for a license to operate a still and are granted a license number upon approval of their application. The West Indies Rum Distillery operates Stills 62, 73, 77 and 79 — Stills 62 and 73 are traditional copper-pot stills and Stills 77 and 79 are four-column stills. The wash distilled through the column stills produces a rum that is light in flavor and body, while the copper-pot stills produce a rum that is more intense and robust. By distilling the rum through both the column and pot stills, the West Indies Rum Distillery is able to produce a rum that is soft and delicate, but bursting with flavor.

After distillation, the rum is matured for eight years in ex-bourbon casks. Then, experts from the Renegade Rum Company hand-select individual cuvees, which are transported to the Bruichladdich Distillery for additional maturation. Situated on the island of Islay, the Bruichladdich Distillery benefits from a more temperate climate than the Caribbean, along with a Gulf breeze, and as a result, represents a unique environment for aging rum. Once the rum reaches Bruichladdich, it is removed from the bourbon casks and double-barreled, or finished, in Martinez port casks. This dual-maturation process enhances the traditional notes of honey, cane sugar and caramel in the rum with hints of fruit and dark cherries, and adds a unique complexity to the rum. After this second maturation, the non-chill filtered rum is bottled in Scotland.

Only 1,590 bottles of this limited edition rum have ever been produced. Pick one up today!

Aroma of caramel, baking spices, and tobacco. Initial notes of brown sugar and vanilla are married with notes of dark berries and cherries, which lead to a sweet finish with a touch of smoke.