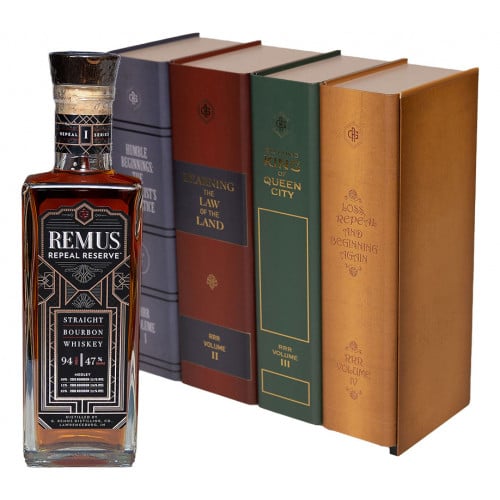 George Remus bourbon is made in honor of the King of the Bootleggers. It's also MGP's house brand, meaning that it's the perfect way to showcase the juices that have become so well regarded. The Repeal Reserve series features their premium offerings and has seen 5 delicious releases. This gift box contains the first 4 expressions, making a perfect gift for any bourbon aficionado. Each of the 4 award-winning whiskeys comes in a 375ml bottle. Each of these annual releases features whiskeys from their rarest reserves, dating from 2005 to 2008.

Get this gift box of 4 delicious bourbons today!

Series I: The first in the series features notes of creamy toffee and honey, leading to bold spice and a finish with dried fruit (raisin & fig) and toffee with an unparalleled smoothness.

Series II: You'll find aromas of maple, vanilla, caramel, toasted oak, and spice on the nose. The palate is sweet with vanilla, brown sugar, smoke, and hints of maple syrup.

Series III: You can expect rich notes of caramel, candied fruit chocolate, baking spice, smoke, and leather on the nose, followed by a smooth finish with lingering caramel and rye spice.

Series IV: The high-rye recipe shines through the profile with caramel, maple, vanilla, candied fruit, cinnamon, spice, and toasted oak. Finishes with oak and plenty of lingering spice, as well as a touch of orange zest.