Learn more
Size750mL Proof80 (40% ABV) *Please note that the ABV of this bottle may vary
This alternatively aged whiskey is Compression aged, cutting maturation down to a mere 40-minute process.
Notify me when this product is back in stock. 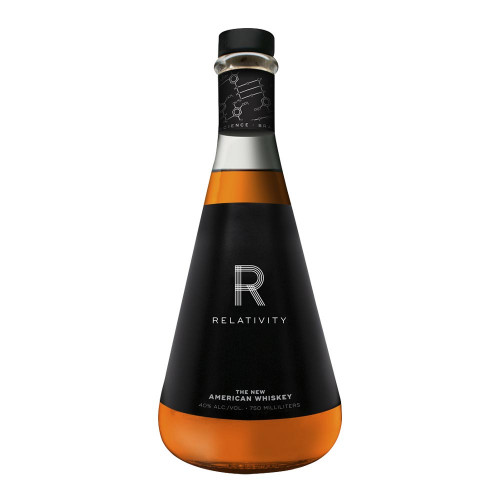 What makes Relativity whiskey special is its aging process, which utilizes computer-controlled cycles of heat and pressure condensing the rate of maturation down to a mere 40-minute process called Compression Aging. This speed-aging technology mimics the seasons of nature, enhancing the whiskey’s secondary maturation process.

Relativity Whiskey is a brilliant honeyed amber color with notes of barley developing on the nose followed by sweet aromas of vanilla, toffee, and toasted caramel. On the palate are notes of caramel, candied orange, toasted coconut, and vanilla with oak and dried citrus on the finish. Bottled at 40% ABV in an Erlenmeyer flask-shaped bottle.

A brilliant honeyed amber color with notes of barley developing on the nose followed by sweet aromas of vanilla, toffee, and toasted caramel. On the palate are notes of caramel, candied orange, toasted coconut, and vanilla with oak and dried citrus on the finish.