Size750mL Proof92 (46% ABV)
Aged for a minimum of two years, this whiskey represents a unique expression of American whiskey, and a terrific value.
Notify me when this product is back in stock. 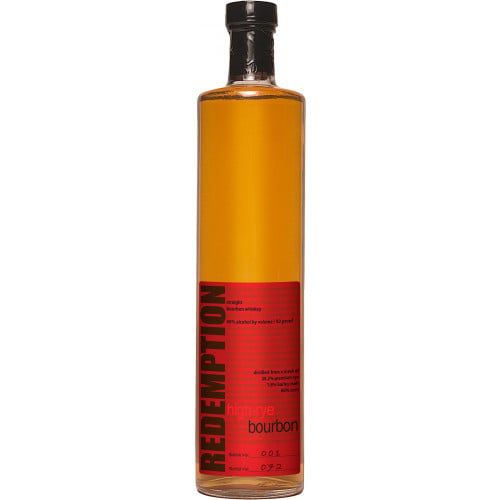 Redemption High-Rye Straight Bourbon Whiskey is made from a mash of 60% corn, 38.2% rye and 1.8% malted barley, leading to a spirit somewhere in between America's historical staple (rye), and its current love (bourbon). After distillation, it is aged for a minimum of two years in new, charred American oak casks before being brought to proof and bottled by hand. It has notes of sweet caramel, dried fruits and toffee, which complement hints of cinnamon and spicy rye.

Redemption Bourbon represents a unique expression of American whiskies at an incredible value. Try it today!

Aroma of butterscotch, cinnamon and creamy vanilla. Notes of sweet caramel, dried fruits and toffee, which complement hints of cinnamon and spicy rye.