Caskers Rewards members earn up to 4 store points back when buying this bottle.
Size150mL Proof80 (40% ABV), 92 (46% ABV), 92 (46% ABV)
This special collection allows you to experience Redbreast12, Redbreast Lustau Edition, and Redbreast 15. Birds of a feather, yet each one singing its own song.
Notify me when this product is back in stock. 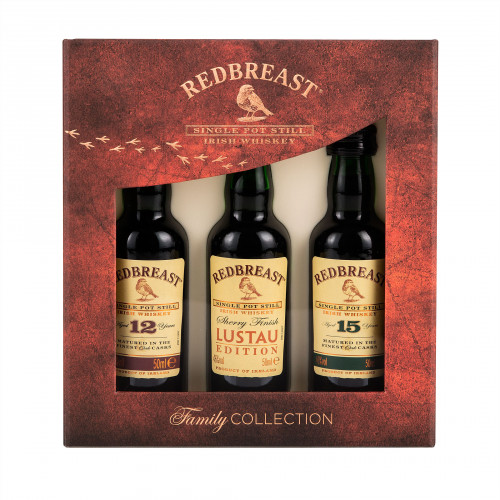 With the Redbreast Family Collection, that warm glow of discovery never ends - with each family member bringing its own taste and personality. This special collection allows you to experience Redbreast 12, Redbreast Lustau Edition, and Redbreast 15. Birds of a feather, yet each one singing its own song. Get ready to explore one of the world’s most celebrated whiskeys.

Today, Redbreast 12 Year Old Single Pot Still Irish Whiskey continues to pay homage to the legacy of Gilbey and its European origins. The whiskey is crafted from a marriage of malted and unmalted barley, which are milled and mashed before being triple-distilled through traditional copper-pot stills. The inclusions of unmalted barley in the whiskey's mashbill, along with the tradition of triple distillation, are uniquely Irish approaches to producing whiskey.

What makes the Redbreast Lustau blend particularly special is the final year it spends finishing in Spanish oak Oloroso casks, hand-selected from Bodegas Lustau for the purpose of accenting sherry flavors that underlie previous releases from Redbreast.

Pick up your Gift Set today!

Redbreast 12 Complex spicy and fruity aroma with toasted wood notes on the nose. The palate is full flavored and complex; a harmonious balance of spicy, creamy, fruity, sherry and toasted notes. The finish is satisfyingly long, and complex.

Redbreast 15 Full and rich on the nose with a balanced complexity of rich berries and aromatic oils. The palate is well-rounded and mellow with succulent fruit, spices and toasted wood. The finish is lingering and sophisticated.

Redbreast Lustau Rich dark fruits on the nose, with notes of licorice, marzipan, toasted oak and Redbreast spices. The palate is creamy with spices and a rich sherry finish followed by Spanish.