Size150mL ProofVarious ABV
Introducing the special tri-pack of Redbreast 12YO, 15YO, and Lustau.
Notify me when this product is back in stock. 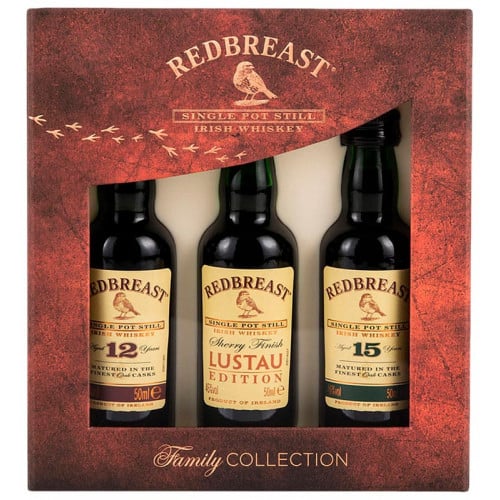 Single Pot Still Irish whiskey is a signature style unique to Ireland, particularily to the Midleton Distillery, Co. Cork. It is regarded as the quintessential style of Irish whiskey. Made from a mash of malted and unmalted barley and then triple distilled in traditional copper pot stills. Pot Still whiskeys are characterized by full, complex flavors and a wonderful, creamy mouthfeel.

Introducing a special tri-pack of Redbreast 12YO (80 proof), 15YO (92 proof), and Lustau (92 proof). Redbreast 12 YO packs the bold flavor complexity and unique qualities of a Pot Still Irish whiskey. Matured in a combination of bourbon and sherry casks, this Redbreast sherry style is a delicious joy to behold in every drop.

Redbreast 12YO: A complex spicy and fruity aroma with toasted wood notes evident.

Redbreast 15YO: Full and rich with a complex yet balanced mix of berry fruits and aromatic oils.