Size750mL Proof90 (45% ABV)
Aged for a minimum of eight years, each bottle of Rebellion Straight Bourbon Whiskey is numbered and bottled by hand.
Notify me when this product is back in stock. 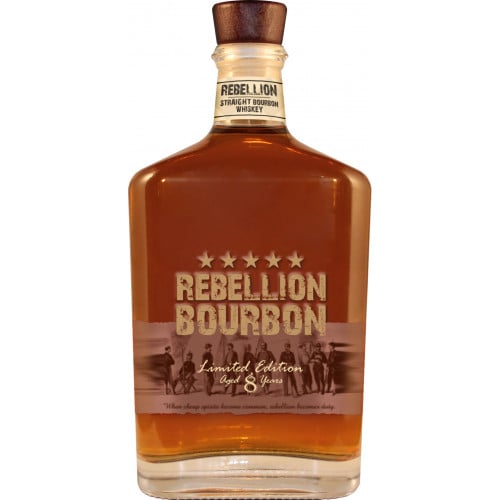 While the history of bourbon is not well documented, industry lore has it that a Baptist minister in Kentucky named Elijah Craig was the first person to distill bourbon and age it in charred, American oak casks. Craig's distillery, which was situated in Fayette County, Kentucky, was founded in 1791. Across the county line, another Kentucky pioneer named Jacob Spears is credited with being the first person to label his whiskey "bourbon." As America's fascination with whiskey grew during the 19th century, the United States Congress tasked "the appropriate agencies of the United States Government" to codify the definition of bourbon.

Today, federal regulations (27 C.F.R. 5) require that bourbon be made from a mashbill of at least 51% corn and aged in new, charred oak barrels before being bottled at a minimum of 80 proof. Bourbon that meets these requirements and that has been aged for a minimum of at least two years may be called straight bourbon.

Rebellion Bourbon is a straight bourbon made from a mash of 70% corn, along with 22% rye and 8% malted barley. After the grains are harvested, they are fermented and distilled in copper-pot stills. Then, the whiskey is aged in charred, American oak casks for a minimum of eight years, before each cask is brought to proof with pure Kentucky spring water and bottled by hand.

Rebellion Bourbon has sweet notes of honey and caramel, which are followed by touches of oak and smoky spices, and ultimately lead to a long, smooth finish. Each batch of Rebellion produces approximately 2,500 bottles of bourbon, and each bottle is numbered by hand.

Sweet notes of honey and caramel, which are followed by touches of oak and smoky spices. Long, smooth finish with notes of vanilla and butterscotch.