$95.99
Caskers Rewards members earn up to 4 store points back when buying this bottle.

Size750mL Proof86 (43% ABV)
Ransom Spirits' The Emerald 1865 Straight American Whiskey is Seestedt's attempt to recreate a traditional Irish Whiskey.
Notify me when this product is back in stock. 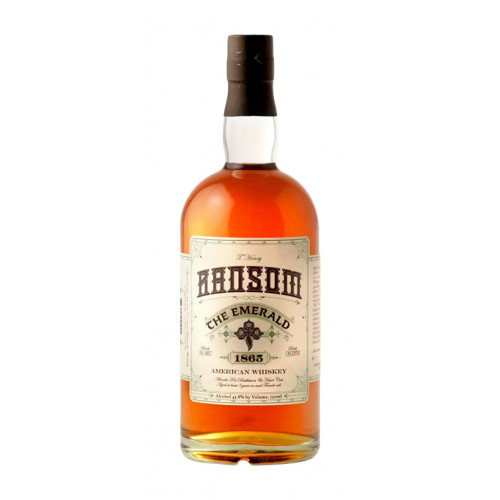 Situated in the foothills of the Cascade Mountains, Ransom Distillery sits on a 40-acre farm just outside Sheridan, Oregon. The distillery, which opened its doors in 1997, was named after the funds required to start the business. "I had always wanted to start my own business," says Tad Seestedt, owner and master distiller at Ransom Spirits, "and I thought that Ransom was an appropriate name in that its definition is buying your freedom or independence with money. The money I had to borrow from the bank to start the business was my Ransom."

Ransom Spirits' The Emerald 1865 Straight American Whiskey is Seestedt's attempt to recreate a traditional Irish Whiskey. "We know that the Irish Whiskey of today little resembles its 19th century predecessors," says Seestedt, "but fortune gave us two good turns: a British excise agent who recorded an Irish mash bill in 1865, and our friend David Wondrich, who found said recipe pouring over the microfiche annals of history and passed it along to us."

The Emerald 1865 Straight American Whiskey is made from a mash of malted barley, unmalted barley, rye and oats. Once the grains have been harvested (a portion of the grains are grown organically on Seestedt's own farm), they are milled and mashed before being distilled on a handmade, direct-fired alembic pot still. Following distillation, the whiskey is matured for three years in a combination of American oak and French oak casks. Then, the whiskey is hand-bottled, waxed and labeled.

The Emerald has a bold aroma of oats, malt and earthy minerals. The aroma gives way to a rich, structured flavor profile, with notes of caramel, green herbs and fresh whipped cream. The finish is long and satisfying, with a touch of spice.

Bold aroma of oats, malt and earthy minerals. Rich, structured flavor profile, with notes of caramel, green herbs and fresh whipped cream. Finish is long and satisfying, with a touch of spice.