Size750mL Proof86 (43% ABV)
R6 Bourbon Whiskey is the very first bourbon to come from Los Angeles. The 86-proof spirit is crafted from yellow corn, rye, and malted barley and has a well-balanced and smooth profile with notes of vanilla, caramel, citrus, and spice.
Notify me when this product is back in stock. 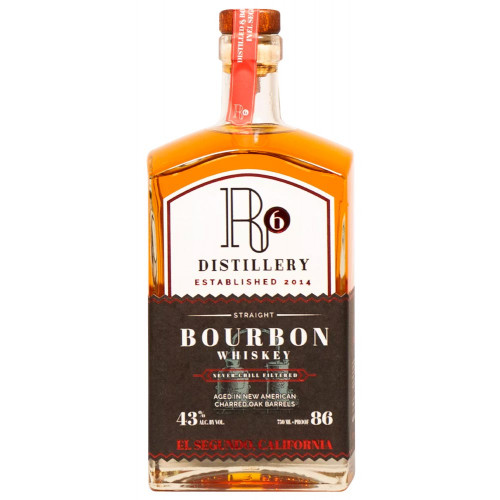 The award-winning R6 Straight Bourbon Whiskey is the first bourbon to be legally produced in Los Angeles. Crafted from a mash bill of yellow corn, rye, and malted barley, it's a well-balanced and smooth American classic that is bottled at 86 proof and has notes of vanilla, caramel, citrus, and spice.

The nose opens with vanilla, caramel, fig, and citrus notes. There is caramel, cinnamon, pepper, corn, and a nuttiness on the palate which culminates in a caramel corn finish.