Size750mL Proof86 (43% ABV)
Aged for three to five years, Prichard's Rye Whiskey earned a score of 90 points at the Ultimate Spirits Challenge in 2012.
Notify me when this product is back in stock. 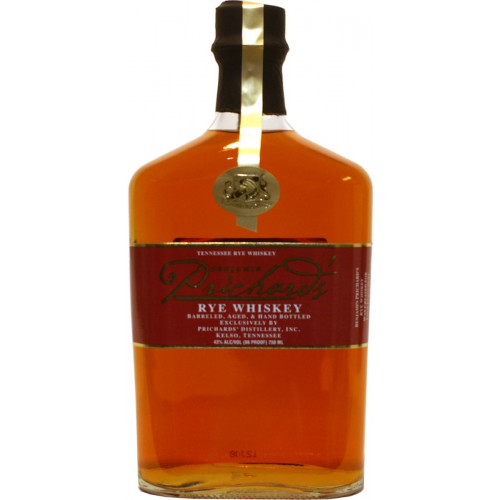 When he passed away in 1822, Benjamin Prichard passed his "still, tubs and utensils thereto"on to his son, Enoch. In the antebellum South, Prichard's Tennessee whiskey — made using white corn and pure Tennessee spring water — was incredibly popular. Enoch eventually gave up the stills, tubs and utensils that his father had passed on to him, and focused his energies elsewhere. In 1997 — five generations later — Phil Prichard took up the family business again when he opened the doors to Prichard's Distillery in Kenslo, Tennessee. The first legal distillery in Tennessee in nearly fifty years, Prichard's Distillery is located just a few miles south of where Phil's great-great-great grandfather distilled whiskey nearly two centuries ago.

Prichard's Rye Whiskey is made from a mash of 95% select American rye grains and 5% malted barley. Once the grains have been harvested, they are mashed and fermented before being distilled through Prichard's copper-pot still. Following distillation, the rye whiskey is aged in small, charred American oak casks for three to five years. As a result of this maturation process, Prichard's rye has an aroma of vanilla, apples and light cinnamon. The aroma gives way to notes of spicy rye, citrus, honeyed oak and caramel, and leads to a sustained finish with hints of apples, oranges, caramel and oak.

Prichard's Rye Whiskey earned a score of 90 points at the Ultimate Spirits Challenge in 2012, which said that it was "excellent"and "highly recommended."

Pick up a bottle of Prichard's today!