Learn more
Size750mL Proof104 (52% ABV) *Please note that the ABV of this bottle may vary
This astonishing 30-year-old whisky was distilled in the final year of Port Ellen’s existence.
Notify me when this product is back in stock. 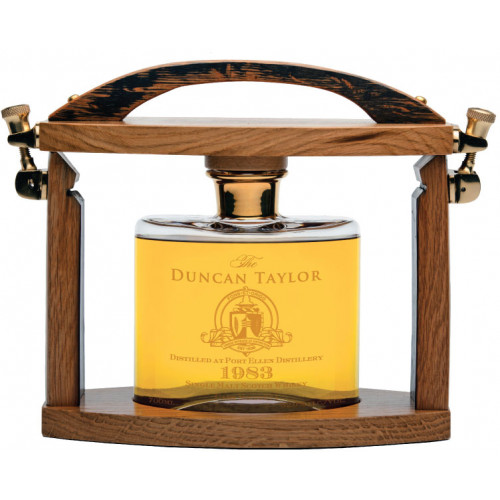 Port Ellen 1983 Single Malt Scotch Whisky (Duncan Taylor Bottling) was distilled at Port Ellen in 1983, making it some of the last whisky ever produced at the distillery (Port Ellen was mothballed later that year). Aged for 30 years and bottled at cask strength (104 proof), this rare bottling is uncut, unfiltered and encased in a wooden tantalus worthy of the spirit it contains.

This exceptional whisky has a golden wheat hue and an aroma of caramel, peat bogs, hay and fresh apples. The palate is at once light and full of character, with notes of peaches, almonds and mint giving way to a smooth, dry finish characterized by raisins, marmalade and breakfast cake.

Only a few of these bottles will ever be made available for purchase — be sure to pick one up today!

Golden wheat hue and an aroma of caramel, peat bogs, hay and fresh apples. The palate is at once light and full of character, with notes of peaches, almonds and mint giving way to a smooth, dry finish characterized by raisins, marmalade and breakfast cake.