Size750mL Proof107 ( 53.3% ABV)
1,350 bourbon barrels were sourced from MGP by Pinhook. These are now patiently maturing at Castle & Key, with 150 released each year. At 6 years of age, the subtle honey & smoke notes have developed into cherry, clove, and vanilla. 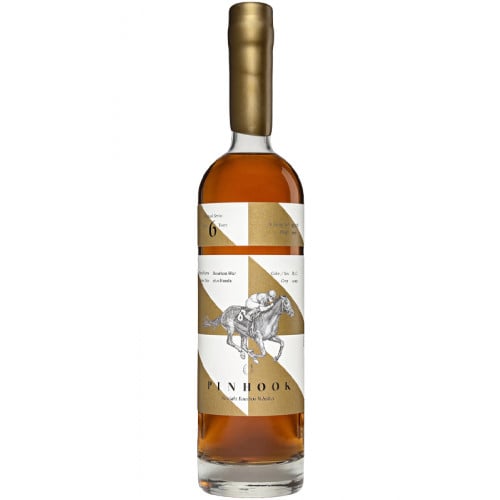 Every fall Pinhook features an annual vintage of Pinhook bourbons and ryes, each of which is inspired by a thoroughbred horse. Each blend is as unique as the horse on the label. "Pinhooking" refers to an old Kentucky term for purchasing young thoroughbreds, holding them until they mature, and selling them when they are ready to run. Successful pinhooks — much like whiskey — are made on instinct, experience, an appreciation of quality, and a little luck. Pinhook bourbons and ryes are handcrafted to reflect the richness of the Kentucky soil and the character of its beautiful horse country.

The Bourbon Vertical Series is an annual-release series that follows 1,350 MGP bourbon barrels through their aging process up until 12 years of age. "It will be exciting to follow the maturation of both rye and bourbon over the course of 9 years and understand how each style of whiskey progresses individually as well as in comparison to the other," says Master Blender Sean Josephs. 2021 brings us Bourbon War, this time in 6-year-old form. With a mash bill of 75% corn, 20.5% rye, and 4.5% malted barley, it's a rich expression with notes of brown sugar, licorice, and toasted almond. The additional year has caused the subtle smoke and honey notes to develop into cherry, clove, and vanilla.

Continue your Vertical journey with this delicious bourbon today!

You'll find brown sugar, toasted almond, and licorice aromas on the nose. The palate sees the subtle honey and smoke notes of the 5-year-old develop into black cherry, clove, and vanilla, culminating in a satisfyingly long finish.