Learn more
Size750mL Proof90 (45% ABV) *Please note that the ABV of this bottle may vary
Crafted from a high-rye mashbill, this bourbon is aged for a minimum of six years.

There are several editions available, so the bottle picture is symbolic.
Notify me when this product is back in stock. 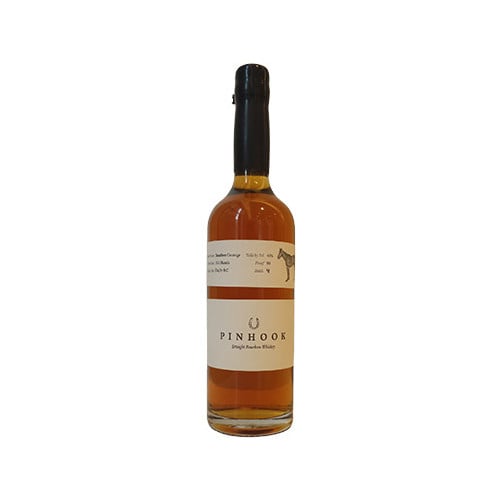 Federal regulations in the United States (27 C.F.R. 5 to be specific) require that bourbon be made from a mashbill of at least 51% corn before being matured in new oak barrels and bottled at 80 proof or higher. Bourbon that meets these requirements and that has been aged for a minimum of at least two years may be called straight bourbon.

Pinhook Straight Bourbon Whiskey is a Kentucky straight bourbon that has been crafted from a mash of 75% corn, 20% rye and 5% malted barley. Once the bourbon has been distilled, it is aged in new, charred American oak barrels for at least six years before being bottled at 90 proof. The name of the bourbon is derived from the term used in thoroughbred racing, and refers to the practice of buying horses immediately after they are born and overseeing their training and maturation.

Due to the bourbon's high-rye mashbill, it has notes of salted caramel, warm biscuits and creamy vanilla that are accented by touches of spicy rye, cinnamon and ginger. The finish is warm and sweet, with a touch of roasted nuts, charcoal and beef jerky.

With no added coloring or flavoring, Pinhook is a marriage of two of Kentucky's most recognizable products: horses and bourbon. Pick up a bottle today!

Notes of salted caramel, warm biscuits and creamy vanilla that are accented by touches of spicy rye, cinnamon and ginger. Finish is warm and sweet, with a touch of roasted nuts, charcoal and beef jerky.