Size750mL Proof95 (47.5% ABV)
Distilled from Old Howling Bastard beer, this whisky is aged for just over a year in small oak casks.
Notify me when this product is back in stock. 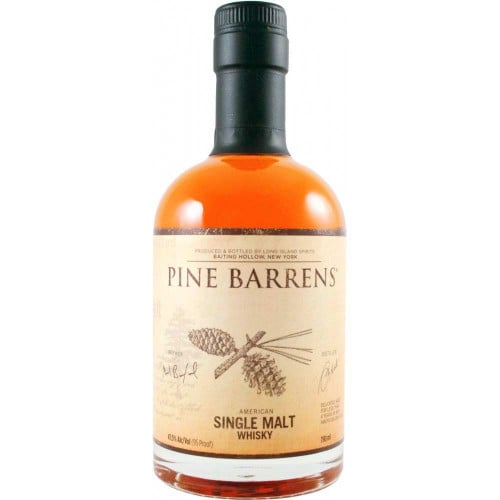 "I've always been a whisky fan," says Rich Stabile, the founder of Long Island Spirits and the creator of Pine Barrens Single Malt Whisky. "When we decided we were going to make a whisky, we really wanted to do something different and knock people's socks off. Most American whiskies are made from corn or rye — we wanted to do something totally unique, so we decided to distill a craft beer."

Pine Barrens Single Malt Whisky is distilled from bottle-ready Old Howling Bastard beer (10.0% ABV). The beer, which is made from English two-row barley and Vienna malt, has a robust caramel flavor that is nicely balanced by strong notes of hops. "All whiskies start out as beer, but 99.999% of those beers are undrinkable before you distill them," says Stabile. "We started our whisky-making process with a great, high quality, drinkable beer and distilled it in micro-batches."

Working from his distillery situated on the North Fork peninsula of Long Island, Stabile, together with his team of distillers, distilled 850 gallons of the beer through twin, 650-liter custom-made copper pot stills equipped with 30-foot tall rectification distillation columns, turning it into 100 gallons of whisky. The whisky was then brought to 125 proof with water sourced from an aquifer beneath the 100,000-acre Pine Barrens Forest Preserve and aged in 10-gallon, charred oak casks for just over two months. Stabile then brought the whisky down to 95 proof and aged it for another 10-12 months. After maturation, each bottle was filled and labeled by hand.

Pine Barrens Single Malt has a rich, heady aroma with subtle notes of vanilla, malt and a touch of sweetness. The barley ale gives the single malt a smooth mouthfeel, while the oak casks provide for warming notes of caramel that ultimately lead to a smooth and memorable finish.

"It's part of the pioneer spirit to try to do something by putting your own signature on it," says Stabile. "I'm not trying to make someone else's product." Be a pioneer and pick up a bottle today!

Rich, heady aroma leads to initial flavors of vanilla, malt and caramel with a touch of sweetness. Smooth and unique mouthfeel, which has an oaky warmth that ultimately leads to a smooth and memorable finish.