Size750mL Proof110 (55% ABV)
This Maryland rye brand, which earned 95 points at the 2015 Ultimate Spirits Challenge, dates back to the Civil War. 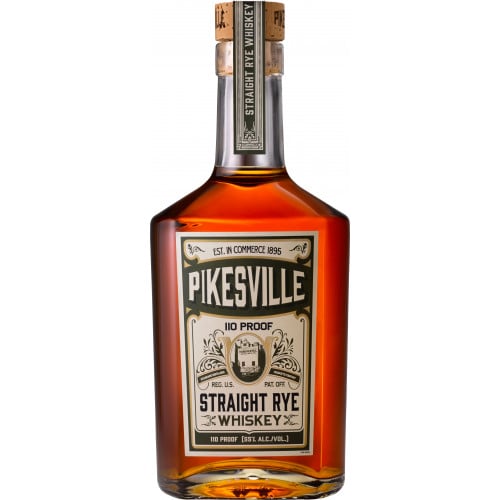 Pikesville Rye traces its Maryland roots all the way back to the Civil War — from 1861-1865, the Civil War drew thousands of outsiders to Maryland, outsiders who would grow accustomed to the state’s particular style of rye whiskey. After the war’s end, these people returned to their homes with a lingering thirst for Maryland rye, and a few pioneering businessmen — with the help of a recently-improved railway infrastructure — began to produce and sell this style of whiskey all across the country.

One such producer was the L. Winand and Brothers Distillery, which was founded in Scott’s Level (just northwest of Baltimore), Maryland in 1895. The distillery began producing its flagship product — Pikesville Rye, named after the adjacent town — shortly thereafter, choosing the name because “Scott’s Level” sounded too much like Scotch. After the passage of Prohibition, L. Winand and Brothers Distillery was forced to close, and though subsequent owners Pikesville continued to distill the whisky in Maryland until 1972, the brand was ultimately sold to Heaven Hill in 1982, making it the last-standing Maryland rye whiskey. Produced today at the famous Bernheim Distillery in Kentucky, Pikeville has maintained its popular status in Baltimore after all these years.

Crafted by Heaven Hills’ Co-Master Distiller Denny Potter, Pikesville Straight Rye Whiskey is made from a mash of rye, corn and barley, and evokes the spicy character of traditional Maryland rye whiskies. “To set it apart from other ryes, I selected barrels at a minimum of six years old from high storage and bottled it at a proof that allows the most character from the barrel to come through without overpowering the spicy grain notes,” says Potter.

As a result, Pikesville Straight Rye Whiskey has a pale copper color and an aroma of dark cocoa and burnt oak. The palate is filled with layers of honey, clover and white chocolate, and leads to a finish accented by vanilla bean, butterscotch candy, maple syrup and caramel.

Pale copper color and an aroma of dark cocoa and burnt oak. The palate is filled with layers of honey, clover and white chocolate, and leads to a finish accented by vanilla bean, butterscotch candy, maple syrup and caramel.