Size750mL Proof80 (40% ABV)
This limited edition bottle honors the U.S. military, and contains whisky proofed with glacier-fed spring water from Mount Hood, Oregon’s highest peak.
Notify me when this product is back in stock. 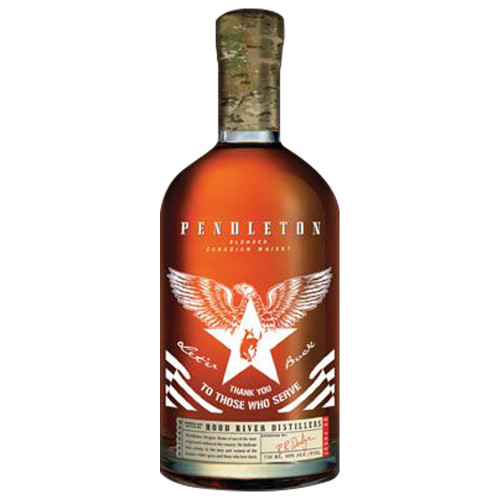 Crafted to honor the bold and independent of the American frontiersman, Pendleton Whisky is named after the Pendleton Round-Up, one of the most prestigious rodeo events in the world. The event has been held during the second week of September each year since 1910, and brings over 50,000 tourists to the city of Pendleton, Oregon.

Pendleton Whisky is crafted from a mashbill composed entirely of rye grains, which are mashed, fermented and distilled in Canada. Following distillation, the whisky is transported to Hood River Distillers in Oregon, where it is brought to proof with glacier-fed spring water from Mount Hood (Oregon’s highest peak) and finished in oak casks from the distillery.

Created in partnership with the Wrangler National Patriot Program, this limited edition bottle of Pendleton Military Salute Whisky honors the men, women and families who have proudly served in the U.S. military. Each bottle comes adorned with a camouflage necker and dog tag, and a portion of the proceeds from each bottle sold will benefit the Paralyzed Veterans of America charity.

Pendleton Military Salute Whisky has a smooth, smoky aroma and notes of cornbread, baked apples and caramel sauce on the palate. The finish is sweet, with notes of maple syrup, shaved nuts and powdered sugar.

The whisky is the previous recipient of a Gold Medal at the San Francisco World Spirits Competition. Pick up a limited edition bottle today!

Smooth, smoky aroma and notes of cornbread, baked apples and caramel sauce on the palate. The finish is sweet, with notes of maple syrup, shaved nuts and powdered sugar.