Size750mL Proof92 Proof (46% ABV)
Aged for a minimum of two years, this bourbon is made from flavorful, tender Western Colorado sweet corn.
Notify me when this product is back in stock. 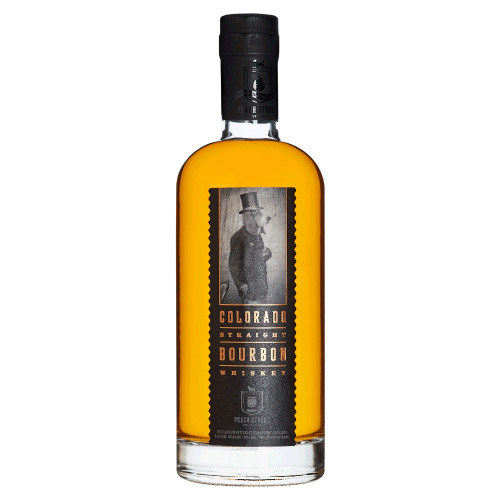 The roots of the sweet corn grown in Olathe, Colorado, can be traced back to the Anasazi (Navajo, for "ancient ones"), who settled the territory in the 8th century. Together with beans and squash, corn served as the staple ingredient in the Anasazi diet. Anasazi corn was rather small compared to modern corn, and priests conducted religious ceremonies in underground kivas during planting season, praying for an abundant harvest.

Today, the sweet corn grown in Olathe — harvested on the Western Slope of Colorado — is a descendant from that ancient and humble Anasazi plant. "It's actually hand-picked corn," says John Harold, owner of Tuxedo Farms. "Because of the tenderness of the corn we have not been able to find a mechanical picker." Unlike ordinary corn, this sweet corn maintains high levels of sugar even after harvesting, and is renowned for its tender and succulent flavor.

The first legal bourbon ever made in Colorado, Peach Street's Colorado Straight Bourbon Whiskey is made from a mash of 60% sweet corn sourced from Olathe (Peach Street Distillery is located just fifty miles away from Olathe), 20% barley and 20% rye. After sourcing the grains from local farmers in Colorado, Davy Lindig, Peach Street Distillery's head distiller, ferments the wort for approximately ten days before distilling it through his custom-made, 500-liter, copper pot still. Each run of the still produces enough whiskey to fill only 1/3 of a cask, meaning that Lindig needs to distill three batches of whiskey in order to fill just one barrel.

After distillation, Lindig ages the bourbon in new, American oak casks for a minimum of two years. Once the bourbon has reached that age, Lindig begins tasting bourbon from each barrel in order to decide on the perfect, small-batch blend. There is no timeline for deciding when to bottle each batch — "it's ready when it tastes ready," Lindig says. After settling on the perfect blend, Lindig brings each batch of bourbon to proof with pure, Rocky Mountain spring water and labels and numbers each bottle by hand.

Peach Street's Colorado Straight Bourbon Whiskey has a smooth flavor, revealing soft hints of caramel and light oak. Still, it's the notes of sweet corn, cereal and buttery biscuits that earned the bourbon the Gold Medal at the 2012 American Distilling Institute Competition and a rating of "Exceptional"by the Beverage Testing Institute. Pick up an exceptional bourbon today!

Nose is sweet, with notes of vanilla and oak. An initial burst of sweet, flavorful corn, followed by notes of mellow cereal, caramel and biscuits with a hint of honey. Well-balanced with a hint of spice from the rye.