Size750mL Proof80 (40% ABV)
Coming straight from the shores of Goa, India, this unpeated single malt whisky is made from Indian six-row barley and matured in charred American oak casks.
Notify me when this product is back in stock. 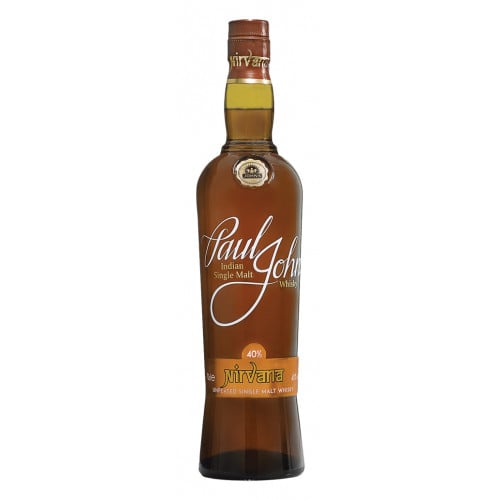 Paul John single malt whiskies are the masterful creations of John Distilleries Ltd. JDL was established in 1992, by Mr. Paul P. John, who had a vision for creating a quality, premium, international single malt. Most Indian whiskies are not distilled from the usual grains that Scotch whisky drinkers are accustomed to. Rum drinkers, on the other hand, are likely to be familiar with the molasses base these are distilled from.

Mr. Paul P. John had the vision of bringing a single malt to the market that would captivate even the most cutthroat whisky connoisseurs. Under the guidance of Master Distiller Michael D’Souza, John embarked on a journey to create "The Great Indian Single Malt". This single malt whisky hails from the southwestern Indian state of Goa. As one of the 3 biggest whisky producers in India, JDL launched their single malt in 2008 and made their full lineup of whiskies available in US markets in 2016.

Their Indian barley, sourced from the foothills of the Himalayan mountains, yields less alcohol than its European counterpart, but is said to have a much higher flavor profile. The whisky is matured in a tropical climate, which results in over 20% of the spirit evaporating each year. This climate is also what makes Indian whisky mature faster than its Scotch counterparts. JDL has a highly acclaimed and diverse portfolio, including its flagship brand Original Choice Whisky, which sells over 10 million cases a year. They also produce a brand of Brandy (Mônt Castlé, Roulette), and Wine (Big Banyan, Goana’s).

Paul John Nirvana is an unpeated single malt expression crafted from Indian six-row barley and matured in charred American oak casks. It contains no artificial additives and is bottled at 80 proof. You can expect rich and fruity aromas ranging from fruitcake and caramel to notes of honey, apricots, raisins, apples and salted caramel, as well as a hint of brine on the palate. The honey stays on through the very long finish and is joined by a dash of vanilla.

The sweet and fruity aromas range from fruitcake and caramel to notes of honey, apricots, raisins, apples and salted caramel, as well as a hint of brine on the palate. The honey remains during the very long finish and is joined by a dash of vanilla.