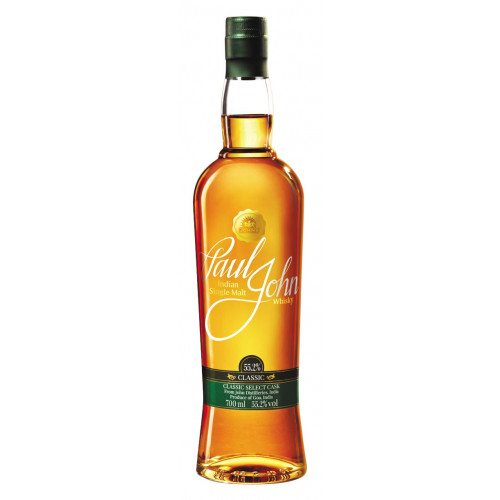 Paul John single malt whiskies are the masterful creations of John Distilleries Ltd. JDL was established in 1992, by Mr. Paul P. John, who had a vision for creating a quality, premium, international single malt. Most Indian whisky is not distilled from the usual grains that Scotch whisky drinkers are accustomed, rum drinkers are more than likely to be more accustomed, as it is distilled from a molasses base.

But Mr. Paul P. John had the vision of bringing a single malt to the market that would captivate even the most cutthroat whisky connoisseurs. Under the guidance of Master Distiller Michael D’Souza, John embarked on a journey to create, 'The Great Indian Single Malt.'

Paul John’s single malt whisky hails from the southwestern Indian state of Goa. As one of the 3 biggest Whisky producers in India, JDL launched their single malt in 2008 and made their full line of whiskies available to US markets in 2016.

Their Indian barley, sourced from the foothills of the Himalayan mountains, yields less alcohol than its European counterpart, but is said to have a much higher flavor profile. The whisky is matured in a tropical climate, which results in over 20% of the whisky being evaporated each year. This climate is what makes Indian whisky mature faster than their Scotch counterparts

This Select Cask Classic is the essence of tropical Goa. Matured in selectively chosen cask profiles, non-chill filtered, and bottled at cask strength, this unpeated whisky has lush notes of fruit and toasted honeycomb.

Fruity, malty aromas are intertwined with honey. A hint of bourbon on the nose. The palate has flavors of malted barley, bourbon, manuka honey-liquorice, and spontaneous notes of toasted honeycomb on the palate. The finish is soft and elegant with juicy Demerara.