Size750mL Proof92 (46% ABV)
Bold is an award-winning fully peated expression from Paul John’s flagship line of Indian single malt whiskies. The barley for this whisky is dried using peat brought over to Goa from Islay. 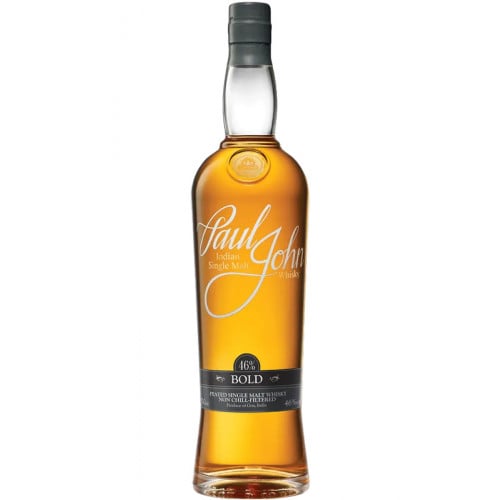 Paul John Whisky is a brand of premium Indian single malts produced by John Distilleries, which has become one of the leading alcoholic beverage companies in India since its inception in 1996. The company now has over 1000 employees and 8 production facilities in 7 Indian states, and owns a strong portfolio of brands, which include whisky, brandy, rum and premium wines. Paul John Whisky is the brainchild of John Distilleries’ Chairman Paul P. John, who wanted to create a great Indian single malt that would present the best of India and its whisky culture to connoisseurs. Paul John single malts are produced in Goa, where the microclimate and the pure underground water and water naturally filtered through the Goan wetlands provide ideal conditions for making whisky.

John Distilleries makes its malts from 6-row barley, growing across India’s northern states of Rajasthan and Haryana all the way to the foothills of the Himalayas. Due to its high fiber and protein content, this barley variety gives a distinct and bold depth of character to the spirit. Owing to the higher husk content, it produces an oilier wash, resulting in oilier, richer spirit. This is one of the key reasons why all Paul John whiskies are bottled at at least 46% ABV and are all non-chill filtered. Paul John whisky is double distilled in copper pot stills with long necks specifically designed to make fruitier spirits. The whisky is then aged in once-used American oak bourbon barrels, which are kept in either the underground warehouse with a more moderate temperature and less humidity, or one of the two ground-level warehouses. The region’s climate with high temperatures and humidity accelerates the maturation of the whisky, which brings out flavors unique to the Indian single malt.

Bold is an award-winning fully peated expression from Paul John’s flagship line of Indian single malt whiskies. The barley for this whisky is dried using peat brought over to Goa from Islay. Bold is aged in ex-Bourbon casks in the distillery’s underground climate-controlled warehouse and bottled at 46% ABV.

Slight whiffs of smoke are followed by aromas of manuka honey, prickly spice and bourbon-like red licorice. The palate feels sublimely silky and studded with oak-like honey at first, followed by a hefty second wave of spice, and a cloudy, smoky feel that coats the roof of the mouth and leaves a wave of dry molasses, peaty soot and a degree of copper. The finish is light, with a tinge of copper slowly developing over the undertones of smoked mocha with delicate and intricate spices.