Size750mL Proof105 (52.5% ABV)
This special release is the first ever Kentucky Straight Rye Whiskey of the Parker’s Heritage Collection.
Notify me when this product is back in stock. 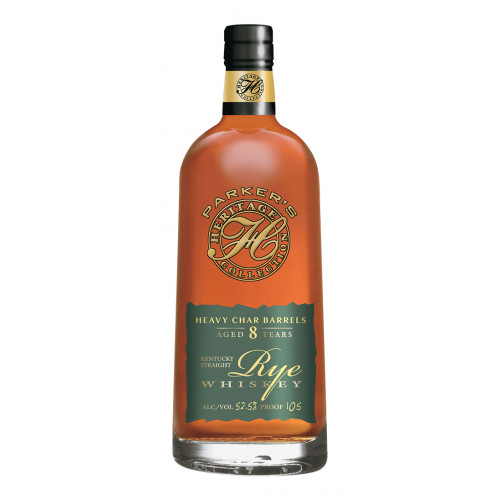 The Parker’s Heritage collection of small-batch bourbons are a series of rare, limited-edition bourbons crafted in tribute to Master Distiller Parker Beam and his five decades of experience distilling whiskey.

Each year, Parker Beam and Heaven Hill select a special expression of whiskey to release under the Parker’s Heritage Collection label. The barrels hand-selected for this series include bourbon, rye and wheat whiskeys, among others, and are some of the highest quality and most diverse American whiskeys to be produced.

This 13th edition eight year old is the first-ever Kentucky Straight Rye Whiskey to be released as a park of the Parker’s Heritage Collection, consisting of 75 specialty barrels charred for a full minute and a half, as opposed to a more traditional 40 seconds. The “Level 5” char barrels have been rested for eight years and nine months, on the seventh floor of Rickhouse Y.

The heavier char allows the whiskey to penetrate further into the barrel, delivering deep notes of spice and wood, resulting in enhanced notes of spice and a distinctive character imparted by their traditional Rye Whiskey mashbill. Parker’s Heritage Collection 13th Edition 8-Year-Old Rye is bottled without chill-filtration at 105 proof.

Notes of chocolate and smoke on the nose. The palate is Rich and smooth with bold spice and honeyed sweetness. The palate is balanced and bold and characterful, echoing rich, and smooth notes on the nose. Dry tannins accentuate the complex rye character’s peppery notes. The finish is lingering and warm with flavors of baking spice.