Learn more
Size750mL Proof90 (45% ABV) *Please note that the ABV of this bottle may vary
Aged with toasted chips from Florida orange trees, this Florida won the Silver Medal at the 2012 American Distilling Institute Competition.
Notify me when this product is back in stock. 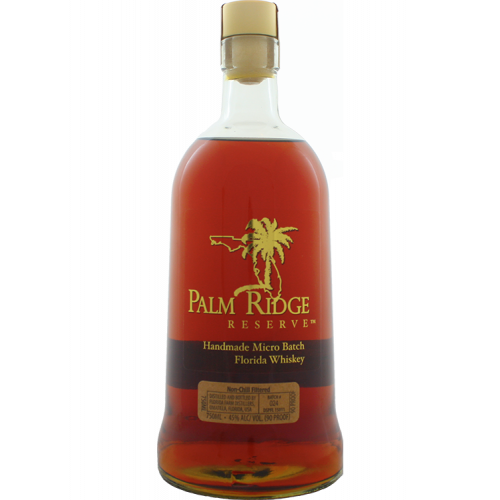 Palm Ridge Reserve Whiskey is made from a mash of corn sourced from a Florida co-op in Lakeland, together with barley malt, rye malt and toasted rye flakes. After mashing and fermenting the grains at his farm (the spent mash is fed to cows), Waters distills the wash in his $5,000 reflux-column copper-pot still for approximately eleven hours. Each batch produces less than 5 gallons of whiskey. "It's a very old-fashioned way of distilling," Dick explains. "It's that homespun thing, that "˜mom and pop making whiskey down on the farm' kind of thing."

After distillation, Dick ages the whiskey in specially charred, 5-gallon Arkansas white oak casks, which cost approximately $130 each. After the whiskey is added to the casks, Dick also adds toasted chips from orange trees to provide additional flavor. The chips are sourced from Dick's own 80-acre farm — he takes a machete to a few orange trees growing on his farm and toasts the chips before adding them to the barrel. During the aging process, the casks are shaken every other day in order to ensure that all of the whiskey is able to come into contact with the cask. After aging the whiskey for just under a year, Marti non-chill filters it and fills and labels each bottle by hand.

Palm Ridge Reserve Whiskey's notes of caramel and vanilla, with a hint of orange citrus, earned it the Silver Medal at the 2012 American Distilling Institute Competition. Only 500 cases of this whiskey are made each year. Pick up a bottle of Palm Ridge Reserve today!

Deep amber hue with smoky, barbecue notes. Sweet vanilla and hazelnut on the palette, which give way to more complex flavors of leather and tobacco. Long, dry finish that is incredibly smooth.